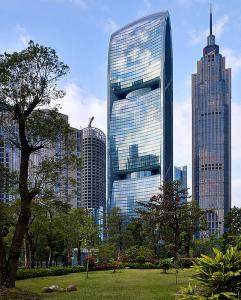 According to Skidmore, Owings & Merrill LLP (SOM), the tower’s sleek, aerodynamic form was developed through a careful understanding of solar and wind patterns around the site. The design optimizes the solar path and utilizes the sun to the building’s advantage. One of the most notable features is the tower’s sculpted design, which directs wind to a pair of openings at its mechanical floors, pushing turbines to generate energy for the building. Other sustainable design and engineering elements— including radiant ceiling cooling system, solar panels, double-glazing curtain wall, demand-based ventilation air, and daylight responsive controls — all contribute to the building’s energy efficiency.

While many of these sustainable attributes have been incorporated individually into skyscrapers around the world, the Pearl River Tower design represents the first time that they are used collectively. The Wall Street Journal dubbed it “one of the world’s most energy-efficient commercial office towers” and the BBC called it the “world’s greenest tower.”