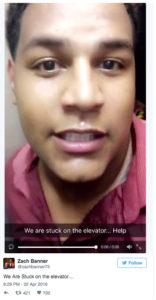 When USC Trojan offensive lineman Zach Banner and seven of his fellow O-linemen went out on the town recently, they learned a tough lesson about elevator weight limits: Don’t ignore them.

Banner, who is 6’9” and 360 pounds and his similarly built football buddies were headed out to dinner with their offensive line coach when they piled into an elevator with a 2,500-pound weight limit. All of them — weighing an estimated 3,200 pounds — at once.

“We were on the fifth floor and it got stuck in between the fourth and fifth floors,” Jordan Austin, one of the linemen aboard, told ESPN. “We didn’t make it very far.”

So Banner did what any self-respecting college student would do in a similar situation: He whipped out his cell phone to record the ordeal to share with the world.

Firemen soon showed up with snacks and water, but the rescue took a while and the stalled elevator, packed with 3,200 pounds of linemen, was getting hot. 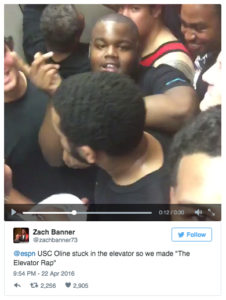 Not ready to give up hope, the teammates got creative and turned to music to lighten the mood. The result was the spontaneous, and surprisingly catchy, “The Elevator Rap.” (Click the image at left to enjoy their musical stylings. Definitely an improvement on the usual “elevator music.”) 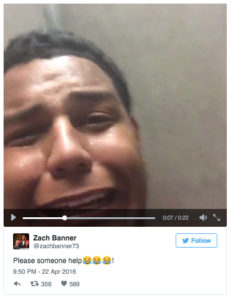 But the fellowship of music could keep the team’s spirits up for only so long: With sweat trickling down his face, and limited power left on his phone, Banner seems ready to abandon all hope…

Miraculously, just about an hour after their ordeal began, the eight USC Trojan offensive linemen were released from their entrapment in the hot, sweaty conveyance by the heroic firemen.

Bet they’ll never do THAT again. (Although considering the scorching popularity of #ElevatorRap it might not be a bad idea!) 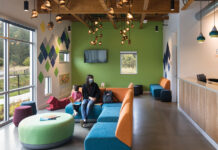 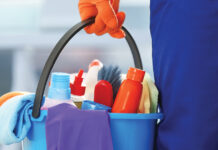