During the winter months, the threat of cold and flu lingers in the back of many people’s minds. This is especially the case at schools and universities, where thousands of students, faculty, and staff congregate, bringing their germs with them.

At Schenectady County Community College in New York, director of facilities, Alan Yauney, has been fighting the war against infectious diseases for the past seven years. Yauney previously spent 13 years in a similar position at the University of Alaska. 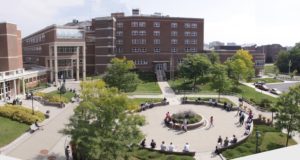 It’s a war that the veteran facility manager is well-armed to fight, bringing a host of infection fighting technologies to the fore, and not just hand sanitizer (although there is certainly plenty of that). “We have sprays over our bathroom door handles that periodically release germicide to eliminate the viruses and bacteria that people leave behind,” explains Yauney.

Also in his infection fighting arsenal is an electrostatic fogging machine that can decontaminate an entire room, even under the tables, during an outbreak. “All of our disinfecting agents are environmentally friendly, underscores Yauney, as he explains a pressure washer he uses to clean bathrooms once per week. In fact, his stockpile of disinfectant has even become a source for other local facility managers when they run out of sanitizing agents at their facilities.

UV-C systems have been used to control airborne infectious diseases in schools and hospitals since the 1940s. Today, UV-C light is used in healthcare facilities to decontaminate surgical and patient areas and even to destroy the Ebola virus in as little as five minutes. Yauney’s earliest memories of UV-C lighting was as a child visiting the pediatrician. “I remember the lights being mounted over my doctor’s door to kill germs,” he says.

Decades later, during the 1980s, Yauney reacquainted himself with UV-C technology when he managed the construction of a water filtration plant in New York. “There were numerous options to disinfect the water,” he recalls. “Chlorine was one, but it’s a toxic chemical. Ozone was another, but it has a short life. We ended up choosing UV-C because it can deliver a continuously high kill rate for microorganisms.”

With these experiences under his belt, Yauney was confident UV-C would be an effective tool for infection control at Schenectady County Community College.

After learning about the GLO upper air germicidal UV-C light fixture, Yauney knew he had the ideal solution for his institutional application.

The wall mounted fixture creates an irradiation zone within the upper region of most any space. Virtually all infectious agents carried upward by convection currents are killed by the ultraviolet irradiation.

“UV-C’s high infection kill rate makes it a no-brainer on a college campus like Schenectady, which is around 400,000 square feet and enrolls roughly 6,500 students,” says Yauney.

Different UV-C systems exist for wall and HVAC/R applications. “In this case, the college wanted the ability to provide on-the-spot infection control with specific standalone installations of the UV-C upper air fixtures,” explains Crowley. At roughly $550 per unit, the GLO’s affordability was another major factor in the decision.

So convinced was Yauney of UV-C’s hygienic value that he managed to diversify payment for the units. “It really wasn’t a hard sell to persuade Administration to pay for UV-C once they understood the indoor air quality benefits it could yield,” he says.

Dropping The Bomb On Infection

Wishing to spare no expense on health and safety, Yauney moved forward to purchase and install 20 units across campus at a total cost of roughly $11,000. Units were positioned in the areas where infections are typically most entrenched, such as the cafeteria and daycare center.

“We installed between five and eight units in the daycare center alone because young children tend to be ill more frequently than adults and their interaction with one another makes transmission rates higher,” says Yauney. Units were also installed near the security desk, the cafeteria, and Café, as well as the student forum and lounge.

One installation challenge was how to position the fixtures so that students could not look directly into the harmful light. To minimize direct exposure to UV-C light, the GLO fixture has baffles that direct and angle the ultraviolet light upward and out of the line-of-sight. Some areas at the college are multi-level, however, so units were strategically placed to avoid exposure to the students. Other areas, like the elevators, were avoided for fear that students would purposely try to access the lamps without realizing the danger of direct UV-C exposure. 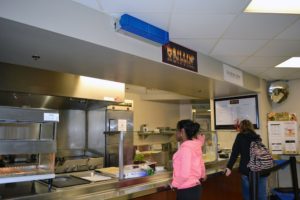 The installations took place over a period of several months, beginning in the spring of 2015 and ending shortly before school resumed this past Fall. Although there is no available empirical data that can assess the units’ performance, knowing that germs are being continuously eradicated is enough for Yauney. “When I get questions from students or faculty about the lamps, I tell them they are removing bacteria from the air, making it healthier to breathe,” he says.

A member of the Association of Physical Plant Administrators (APPA), Yauney asserts, “Anywhere you put thousands of people in close proximity, be it a hospital, airport, large office building, or college, it’s advisable to try to eliminate disease transmission as much as possible. Otherwise, the money you save will be lost to absenteeism and poor indoor air quality.”

In the case of Schenectady County Community College, students, faculty, and staff can feel safe and secure knowing that their ever-watchful facility director is employing the latest in infection control to help keep them healthy and germ-free.