In April of this year, Legrand North America, manufacturer of electrical and digital building infrastructure solutions, turned on a newly installed 500kW, solid-oxide fuel cell system to help power its headquarters in West Hartford, CT. This is the headquarters facility for Legrand North America as well as a manufacturing site for the company’s Wiremold product line. Sited adjacent to the company’s corporate offices and its Wiremold manufacturing facility, the recently commissioned fuel cell system is expected to produce up to 88% of the electricity needed to operate the 263,000 square foot, 100 year old campus. 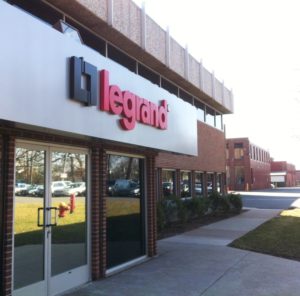 At an event that highlighted the company “flipping the switch” on the new fuel cell installation (a Bloom Energy system), company leadership noted that deciding upon fuel cell technology began with Legrand seeking a solution that would reduce the energy consumption and carbon footprint of its corporate facility, and reduce energy spend.

“We are prepared to do things in new ways, improve our processes, make new investments, and design our products differently, to demonstrate our commitment [to sustainability],” said John Selldorff, CEO of Legrand North & Central America. “At Legrand, we begin with more sustainable manufacturing processes and a design approach that leads to products that deliver better performance with a smaller environmental impact. The fuel cell is one prominent example.”

The new fuel cell will generate an approximate 21% reduction in energy intensity and as much as 50% percent reduction in harmful CO2 emissions for the West Hartford facility. 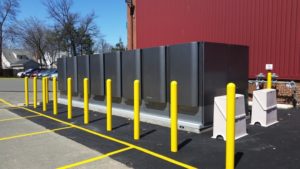 At system capacity, the net savings will be approximately $2.4 million over the first 10 years. The company qualified for low-emission renewable energy credits (LRECs) for the system, which was a factor in its evaluation process.

In evaluating the energy options—a team effort involving numerous departments at the facility—other alternative energy sources were considered. But either the sustainable benefits were not as great, the cost to deploy was higher, or the power output was not as dependable. For instance, the fuel cell produces power constantly, while solar panels typically produce power during daylight hours and their capacity can be affected by weather.

Solid oxide fuel cells are electromechanical devices that convert the chemical energy of fuel and an oxidant directly into electrical energy without combustion taking place, for an energy source with a lower environmental impact compared to legacy power systems. The cells require a sand-like powder instead of precious metals, which cost less and conversion from fuel to electricity happens at twice the rate of conventional technologies.

Once the decision was approved by the CEO and CFO, the timeline to get the Bloom Energy system up and running consisted of about nine months for negotiation (inclusive of LREC auction). The actual installation took 20 days.

Five years ago, Legrand made a commitment to reduce the energy intensity by 25% in 10 years across 14 of its U.S. facilities and set a separate goal to reduce the West Hartford facility’s energy intensity by 10% in two years. These commitments established Legrand as a Better Buildings, Better Plant “Challenge Partner” in the U.S. Department of Energy’s Better Buildings program.

Within two years, Legrand met both goals and subsequently committed to achieving even higher energy reduction levels across all of its facilities throughout North America by 2022.

“Legrand now has its sights set on achieving another 25% total reduction in energy intensity across all of its North American facilities from a 2012 baseline and the fuel cell is going to help us meet that lofty goal here in West Hartford,” said Rochford.