The Council on Tall Buildings and Urban Habitat (CTBUH) has announced the winners and finalists of its CTBUH 2016 Tall Building Awards. This year’s winners and finalists, selected from 132 entries, have set a new bar for the annual awards program, with many employing inventive solutions that respond to demanding site constraints and prerogatives related to sustainability, seismicity, wind forces, mixed functionality, and a vibrant urban habitat.

The Best Tall Building category recognizes projects that have made extraordinary contributions to the advancement of tall buildings and the urban environment, and that achieve sustainability at the highest and broadest level. The winning projects exhibit processes and innovations that have added to the profession of design and enhance the cities and the lives of their inhabitants.

The following Best Tall Buildings winners have been named for each of four competing regions in the world, from nominees representing a total of 27 countries. 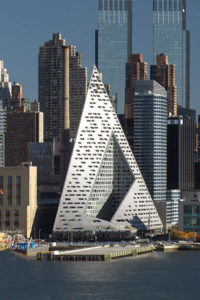 VIA 57 WEST accomplishes the ambitious goal of forging an entirely new high-rise typology. Coined by the architect as a “courtscraper,” the tower is a hybrid between the European perimeter block and the traditional Manhattan high-rise, while combining the advantages of both. It has the compactness, density, and intimacy of a classic courtyard building with the grandeur, airiness, and expansive views of a skyscraper. The building offers a unique vision for the future of the tall building; one that manages to synthesize high-quality and visually appealing architecture with the needs of the client, all without sacrificing environmental performance or residential quality. 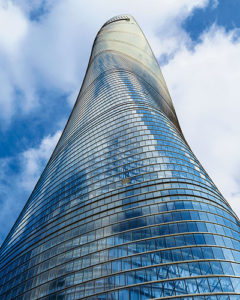 Shanghai Tower embodies a new prototype for tall buildings. Placed in close proximity to Jin Mao Tower and Shanghai World Financial Center, the tower rises high above the skyline, its curved façade and spiraling form symbolizing the dynamic emergence of modern China. But its twisting form goes beyond just creating a unique appearance; wind tunnel tests confirm a 24 percent savings in structural wind loading when compared to a rectangular building of the same height. The tower’s program is organized into nine vertical zones. Each of these vertical neighborhoods rise from a sky lobby, a light-filled garden atrium that creates a sense of community and supports daily life with a varied program catering to tenants and visitors.

“Shanghai Tower shows the greatest commitment to communal space in a tall building since Commerzbank Tower completed in 1997,” said Antony Wood, Juror, Executive Director, CTBUH, Chicago. “It contains the world’s first truly ‘inhabitable’ double-skin façade on a skyscraper, which is not only remarkable for its intended greenery, but its incorporation into the tower’s overall ventilation strategy. The sacrifice of valuable floor area to realize this social amenity proves that the aspirations for Shanghai Tower went far beyond mere commercial gain.” 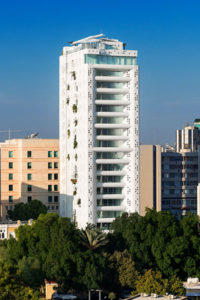 The White Walls has single-handedly transformed the urban silhouette of Nicosia, the capital of Cyprus, drawing upon its context to deliver a residential-office tower that is unmistakably Mediterranean, yet global influential with its highly successful environmental considerations. The mass of the tower’s white concrete walls is negated by numerous square perforations, from which an assortment of hanging vegetation protrudes. Abundant greenery is also present on its southern balconies, with native plants covering nearly 80 percent of the façade area. The resulting coverage serves to trap carbon dioxide, emit oxygen, and provide energy-saving shade.

“The White Walls is a truly groundbreaking exercise in materiality, serving as a successful expression of the architectural and environmental values of the Mediterranean across the vertical axis,” said Karl Fender, Jury Chair, Director, Fender Katsalidis Architects, Melbourne. “Extensive vegetation on the north façade and the presence of loggias on the south façade create a very real connection with nature, while the tower’s punctured concrete walls quite literally ‘bleed green’ with tangles of local plant species.” 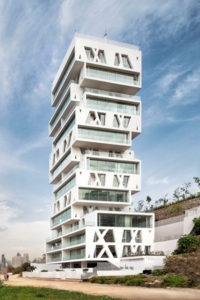 The Cube employs a residential design concept that is simple yet extraordinarily effective, rotating and displacing volumes on each floor to offer residents unique outdoor areas and panoramic views of Beirut. The design stacks 14 rotated floor plans on top of a lobby, generating 21 apartments with fluid spaces, large balconies, and wall-to-wall window frames. The structure is unique for utilizing Self-Consolidating Concrete, allowing loads to be directed to four areas of rotated girders on every floor, with no additional structural slabs added to the façades.

“The Cube indicates a clear alternative to the extruded box typology that defines the majority of residential high-rises around the world, instead comprising a stack of completely unique villas in the sky,” said Hashimah Hashim, Juror, Executive Director, KLCC Property Holdings Berhad, Kuala Lumpur. “The tower is particularly successful in its structural design, which features a system of elegantly framed girder walls that add visual flair and allow for completely unobstructed floor plans.” 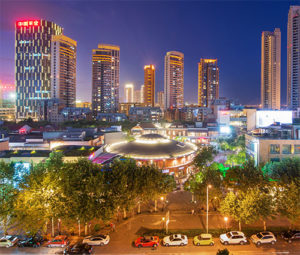 The Urban Habitat award recognizes significant contributions to the urban realm in connection with tall buildings. These projects demonstrate a positive contribution to the surrounding environment, add to the social sustainability of both their immediate and wider settings, and represent design influenced by context, both environmentally and culturally.

This year’s winner, Wuhan Tiandi Site A, is an exemplary urban regeneration master plan that has transformed an underutilized dilapidated district into a true metropolitan community. Located in the Wuhan core area, its ethos is to establish a compact, sustainable, transit-oriented, pedestrian friendly community with walkable blocks and courtyard housing, elements rarely seen in new developments throughout China. The urban form integrates buildings of different heights to create spatial and visual interest. Towers are placed in strategic locations within the community, capitalizing on views of the Yangzi River, and creating valuable settings for landmark towers. The remaining site area is dedicated to an elaborate connective tissue comprising low- and mid-rise blocks, public spaces, and landscaping.

“The Wuhan Tiandi Mixed-Use Development demonstrates that a master plan for a tall building neighborhood can include vibrant public spaces that offer a high level of intimacy, walkability, and social design,” said James Parakh, Juror, Urban Design Manager, City Planning Department, Toronto. “The disposition of tall buildings combined with an animated public realm creates a vibrancy that is rarely found in newly created communities. The Wuhan Tiandi complex offers a high quality of life for those that live, work, and visit – a quality of life that rivals long established tall building neighborhoods found elsewhere in the world.” said 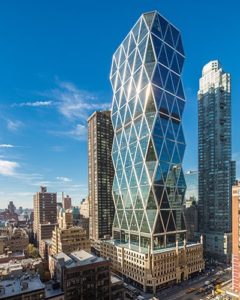 The 10 Year Award recognizes proven value and performance over a period of time. This year’s winner is New York City’s Hearst Tower. Completed in 2006 and built atop the hollowed shell of a 1928 landmark office building, the building tread new ground in terms of historic preservation when it was completed 10 years ago in New York City. Since then, the tower’s impact on the local and global tall building industry has only become clearer, not least for its forward-looking green strategies.

Using 26% less energy than a building constructed to normal code, Hearst Tower features a distinct, thermal efficient diagrid that provides a vast open interior. The building’s unique design saved 2,000 tons of steel, involved 90% of steel made from recycled material, and required only 10% of all materials to be imported during construction, reducing overall cost and emissions. But these achievements were only the beginning. Since completion the building has continued to receive a number of environmental upgrades, allowing it to keep pace with the latest green standards.

Touching on the building owner’s commitment to sustainability, Louis Nowikas, vice president of the Hearst Corporation, stated, “It is not enough to build a green building, we must make sure that the building continues to perform and improve over the long haul. At Hearst Tower, we are proud of the sustainable culture we have created…always asking ‘what’s next’ and not resting on our laurels.”

“Walking along the base of Hearst Tower, you might not even realize that you are right next to one of New York’s greatest architectural achievements of the 2000s,” said Timothy Johnson, CTBUH Trustee/Design Partner, NBBJ, New York City. “Built directly on top of a 1920s office relic, the tower made the world reexamine what’s possible in terms of preserving historic low-rise buildings in a dense downtown core. There’s also something cathartic about the juxtaposition between its classically reserved base and contemporary diagrid structure above.” 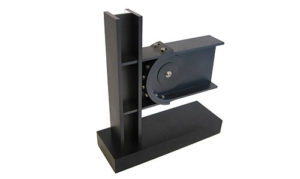 Unlike the other awards, which consider each project holistically, the Innovation Award is focused on one area of innovation within the design, construction, or operation of the project. The areas of innovation can include technical breakthroughs, construction methods, design approaches, urban planning, building systems, façades, and interior environment. 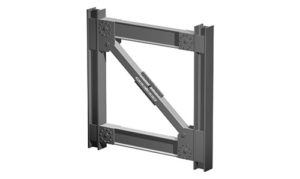 This year’s winner, the Pin-Fuse, is a dual-element structural solution, composed of Pin-Fuse Joints® and Pin-Fuse Frames™, which slip at pre-set loads to dissipate energy and achieve ductility during seismic events. Ensuring life-safety and collapse prevention performance of structures in moderate and severe earthquakes is generally considered to be a minimum seismic design objective for structures, and is embodied in the codes of most countries. Achieving this objective does not, however, guarantee that a structure can remain in use after a severe earthquake. Damage to components and the permanent drift of a structure often require very expensive repairs and, not infrequently, total replacement of structures. With Pin-Fuse, material yielding and frictional slip allow base structural materials to remain undamaged, thereby reducing associated repairs, offering the potential for increased resilience, lower costs, and enhanced sustainability. 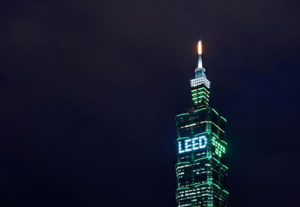 CTBUH’s Performance Award recognizes the measured environmental performance of a building or development, and the award goes to the building that has the least environmental impact on the urban realm using measured data.

This year’s winner, TAIPEI 101, already implemented a high level of performance when it was completed in 2004, but this was only the beginning of a 10-plus-year upgrade campaign that has allowed the tower to meet and exceed continuously intensifying green standards recognized around the world. Rigorously adopted and implemented by the management team, the sustainability program for the tower is comprehensive – from the installation of numerous efficient lighting fixtures and plumbing systems, to a robust waste collection system and occupant engagement scheme. Equally successful is the tower’s collection of data, which is examined and reflected upon as systems are further optimized over time.

“It is rare to see a commitment to upgrade an existing building to this level of environmental performance,” said Bill Browning, Technical Juror, Co-Founder, Terrapin Bright Green. “The extensive documentation of its energy upgrades and sustainability initiatives speaks for itself; TAIPEI 101 has been the subject of a tireless and exhaustive effort to become one of the most sustainable tall buildings in the world, and it has been successful in this mission. In addition to a comprehensive set of green technologies and systems installed throughout the building, a rigorous occupant engagement program really puts this project in a league of its own.”

To learn more about the awards, and each of the buildings honored, visit CTBUH’s website.

Safety May 23, 2022
DWS has advanced their flexible RediMat tactile warning product to include mesh reinforcement for added strength and increased durability.