This recall involves Cree LED T8 Replacement Lamps, including lamps that were provided as free replacements for a previous recall in June 2015 and new lamps sold since the recall.

These lamps are used indoors to replace traditional two-pin T8 fluorescent tubes. The white lamps have a cylindrical shape and measure 48 inches long. “Cree,” “BT848 Series Lamp,” the product number and a four-digit date code are printed on the lamp or on a white label affixed to the lamp. 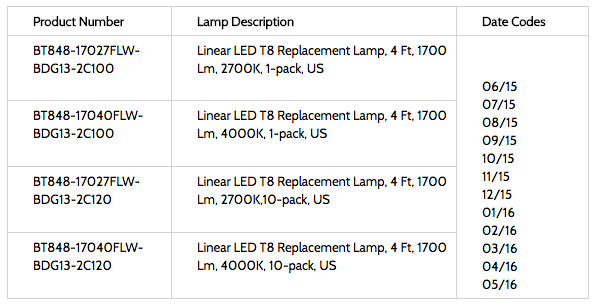 Cree has received 12 reports of the recalled lamps overheating and melting. No injuries have been reported.