You may not even know today is a holiday, but it’s one that celebrates what is arguably one of the most important, and frequently used, inventions of our time: Toilet paper! Yes, August 26 is National Toilet Paper Day.

In honor of the humble roll of paper that’s by our side when we need it most, here are five things you probably didn’t know about toilet paper, courtesy of Veritiv, which sells almost half a billion rolls of TP each year (enough to stretch from the Earth to the moon and back 31 times)!

People have used some interesting things in place of TP. Some, like water, make sense. Others, such as seashells, sound downright painful. Hay, corncobs, leaves, sticks, stones, sand moss, hemp, wool, husks, fruit peels, ferns, sponges, and broken pottery have all been used in the bathroom at one time or another. 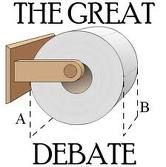 In 2010, toilet paper company Cottonelle used the debate over whether TP should be hung “over” (position B in the illustration at right, away from the wall) or “under” (position A, close to the wall) as part of an advertising campaign. “The Cottonelle Roll Poll,” an online poll to find out which method Americans preferred, attracted more than 500,000 voters. The verdict? 72% of voters chose the “over” position.

Which TP position do you prefer, over or under? Share your preference, and why, in the Comments section below!