The Model C and Model C+ are hydrocarbon detectors from Grace Industries, Inc. They identify fuel oil concentrations of less than 200 ppm (parts per million) or gas leaks of less than one cubic foot per year. 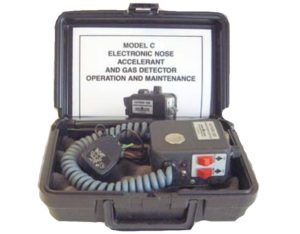 The Model C is a non-calibrated gas detector used primarily for arson investigation and where it is desirable to detect trace amounts of hydrocarbons. The Model C+ gas detector features both a high sensitivity and a calibrated mode of operation. It is used to indicate if a gas is explosive. In the calibrated mode, the detector will only annunciate if a gas has exceeded a preset level, 20% of the lower explosive limit (methane used as test gas).

Once units are turned on they need several minutes for warm up. Users can then scan the area of concern. When gas or a hydrocarbon is present, beep tones in synchronism with a red indicator light will occur. A slow beep rate indicates a small amount of gas or accelerant, whereas a more rapid rate indicates a higher gas concentration. A mute switch turns off audio tones and permits discreet investigation.

The Model C and Model C+ detect approximately 125 toxic/combustible gases and/or vapors, including all heating gases. Audio and visual indication of accelerants and gas detection are displayed via a green “ready” indicator, yellow “purge” indicator, and red “sensor/detection” indicator. When the purge switch is pushed up and the yellow purge indicator light is on, the sensor element is purged of desorbed accelerants/gases.

The Model C and Model C+ feature a sensor guard, audio annunciator, mode selection, and sensitivity control. Higher sensitivity is used to locate trace amounts of hydrocarbons. Lower sensitivity aids in pinpointing the source in areas of high concentration. The solid state plug in type sensor is housed in a protective guard and mounted at the end of a 6′ coiled sensor cord that is automatically retractable.

Made in the U.S., the Model C and Model C+ are powered by nickel cadmium rechargeable batteries with a battery charger jack and light. They provide six to seven hours of use. Each gas detector is housed in a corrosive resistant steel enclosure, measures 3¼” x 37/16″ x 2″ wide, and weighs 1 pound, 7 ounces.