The Building Owners and Managers Association (BOMA) International, using the data found in its 2016 Office Experience Exchange Report (Office EER), has compiled a list of the most and least expensive office markets in the United States, both in terms of operating expenses and rental rates. The annual Office EER aggregates office sector income and expense data from the previous year; 2015 data was gathered from more than 5,200 buildings in nearly 275 markets in the U.S. and Canada representing almost 900 million square feet.

Washington, DC’s Maryland suburbs are new to the list of most expensive markets for operating costs, while the other four markets have appeared in the top five markets for three years running. The inclusion of both Washington, DC and the city’s Maryland suburbs indicates the particular economic strength of the Washington metro area. Also of note, New York returned to the top of the list after being bumped last year by San Francisco. New York’s average total operating expenses of $11.94 per square foot (psf) increased from $11.46 per square foot in 2014. At the opposite end of the spectrum, Huntsville, AL, at $4.15 psf, replaced Cincinnati in 2015 as the market with the lowest reporting operating expenses. 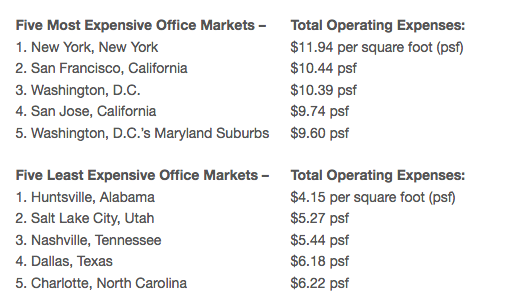 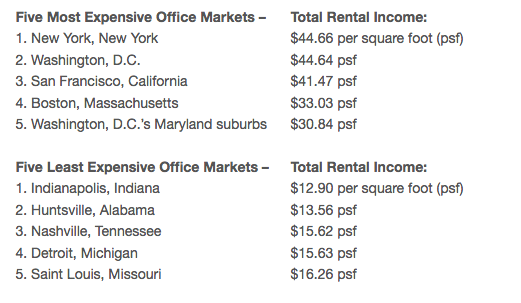 The Office EER provides critical insight into the performance of the office sector with more data than any comparable source in the industry. With extensive historical information, the Office EER allows users to conduct multi-year analysis of single markets, as well as generate customized reports based on various building characteristics and property types, such as medical office buildings, corporate facilities and government buildings. Reports are downloadable as both Excel and PDF documents, and there is no limit to the number of reports users can generate.