The upcoming Trump Administration appears to be a welcome development for the U.S. construction industry, according to forecasters at Dodge Data & Analytics. With his background and experience in construction and real estate development, President-elect Trump understands the important role that construction plays in the growth of the economy and the vitality of cities, asserts this technology-driven provider of construction project data, analytics and insights.

During the course of their campaigns, both Donald Trump and Hillary Clinton highlighted the need for increased federal investment in infrastructure. Under President-elect Trump’s latest proposal, up to $550 billion in federal funds could be invested, presumably over a five-year period, in infrastructure and publics works projects.

“The broad proposal for increased federal funding should support the public works sector, either directly or indirectly, by keeping attention focused on the need to upgrade infrastructure,” said Robert Murray, Chief Economist, Dodge Data & Analytics. “The ways in which the Trump proposals will affect construction will become clearer as more details come forth, including how these proposals make their way through Congress. For the moment, it’s still believed that total construction starts in 2017 will increase 5%, with some dampening for healthcare-related projects accompanied by improvement for public works construction.”

President-elect Trump’s emphasis on upgrading and developing public infrastructure, including roads, bridges, airports, transit systems and ports will, with the approval of the 115th Congress, bring needed revitalization to U.S. infrastructure and create favorable business conditions across the design and construction industries.

While the specifics of federal infrastructure investment in 2017 and beyond will become clearer in the months ahead, the ideas already proposed should help spur Congressional action on two existing legislative items, including the Water Resources Development Act and the 2017 Federal Appropriations Bill, which make provisions for infrastructure spending on water management, transportation and energy infrastructure. 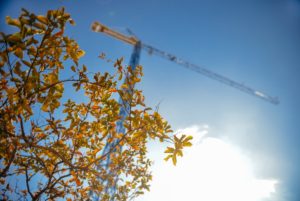 The election has also already provided some clarity on likely construction at the state and local level. Voters have given their approval for several major construction-related measures in California, Colorado, Texas and North Carolina with a combined value upwards of $136 billion for education and transportation sector construction.

[An analysis produced on November 11, 2016 by Dodge Data & Analytics team of economists notes: The passage of several major bond measures in the November 2016 elections should provide support to construction activity in 2017 and beyond. For education related projects, California voters approved Proposition 51 which will allow the state to sell $9 billion in general obligation bonds for new construction and upgrades to educational facilities. This involves $7 billion for K12 public schools and $2 billion for community colleges. Other noteworthy school construction bond measures that achieved passage were in El Paso TX ($669 million), Denver CO ($628 million), Pearland TX ($220 million), and Corpus Christi TX ($194 million).]

Dodge Data & Analytics will continue to closely monitor legislative developments and industry trends, watching for a possible upside to our forecast, to ensure that design and construction businesses are equipped to capitalize on the opportunities that lie ahead. We are encouraged by the tone of the latest developments.