The Iolite LED Downlight Series (patent pending) from Nora Lighting® is now offered with decorative accessories that create visual effects in installations. Iolite is available as a 1″ downlight or as 2″ and 4″ adjustables for a minimal architectural appearance and a number of design and trim possibilities. 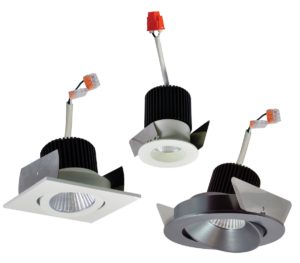 The Iolite downlight features one LED core module, which is compatible with a dedicated downlight housing with various dimming options. It can also be retrofitted as an adjustable downlight. An easy-to-assemble design allows for the installation of Iolite downlights on-site with square or round trims in a variety of finishes. Decorative accessories are added between the module and die-cast trim.

The new decorative elements for the Iolite LED downlight Series include translucent Deco Collars in blue, frost, amber, and red, which can be fitted around the LED module to color the aperture. The LED continues to produce white downlight while the collars add a colorful glow to create visual interest or define a space, such as a lounge area. Collars are offered in 5/8″, 3/4″, and 1″ lengths. 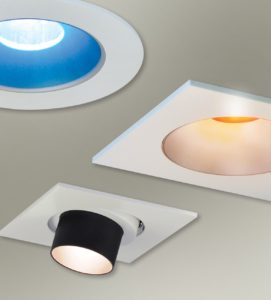 Hex cell louvers and opaque collar snoots that reduce aperture brightness are also offered. The snoots are available in black, matte powder white, and white in 5/8″, 3/4″, and 1″ lengths.

The Iolite ships with a 60° beam spread reflector installed. A 20° and 40° reflector are also included and can be changed in the field. A 15° beam spread is optional. No tools are required to attach the trims or to adjust the four Iolite beam spreads. The Iolite series is ready for installation in IC new construction, remodel, and 4″ retrofits.