As the federal government weighs budget cuts to energy efficiency programs, cities are stepping up their efforts to reduce energy waste. More mayors and local lawmakers in America’s largest cities are turning to energy efficiency to reduce energy costs for consumers and businesses, strengthen the resilience of their communities, and reduce pollution, according to the third edition of the City Energy Efficiency Scorecard, just released by the American Council for an Energy-Efficient Economy (ACEEE).

Boston remains the top U.S. city for energy efficiency, receiving 84.5 out of a possible 100 points, an improvement of 2.5 from its 2015 score, according to the report.

“Being recognized as America’s most energy-efficient city is an accomplishment that should be shared by all Bostonians,” said Boston Mayor Martin J. Walsh. “Whether you’re a resident who lowered their monthly utility bill through Renew Boston or an owner of one of our city’s leading green buildings, we should all be proud of our success to reduce energy and save money.”

“Across the nation, cities are taking steps to save energy, and they are creating more economically vibrant and resilient communities in the process,” said ACEEE senior researcher David Ribeiro, the lead report author.”More than half, 32, of the 51 cities improved their scores from 2015 to 2017, with several making substantial point increases. More cities are requiring building owners to benchmark and report buildings’ energy use, updating building energy codes, and setting community-wide goals to save energy and reduce their greenhouse gas emissions. We also see a new set of cities emerging as leaders for energy efficiency, knocking on the door of the top 10.” 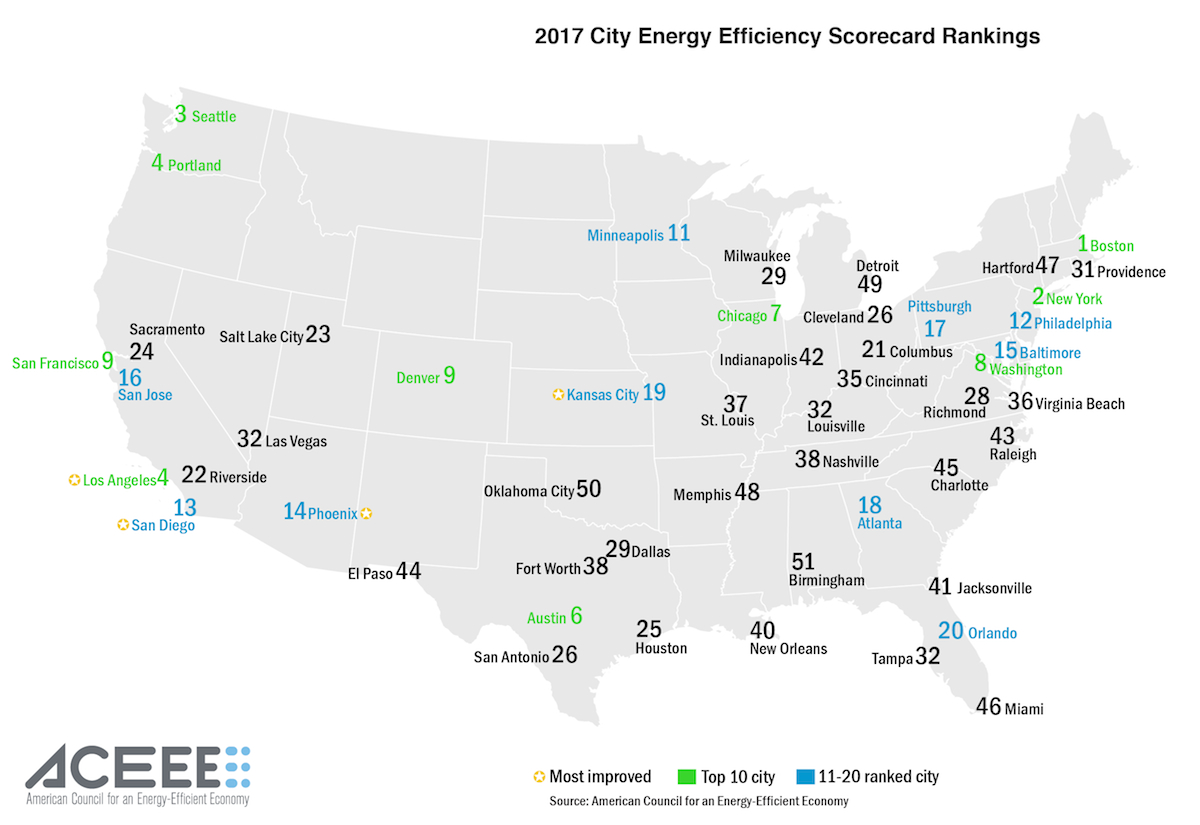 Based on a 25-point jump from the last edition of the Scorecard in 2015, Los Angeles was the most-improved city. It entered the top five — and the top 10 — for the first time. Los Angeles is home to a new Existing Building Energy and Water Efficiency program, which requires an energy audit, retrofit, and benchmarking for many commercial and multifamily buildings, as well as water efficiency measures.

“Building a sustainable Los Angeles is not a task for the distant future, it is a goal we are accomplishing right now with our Sustainable City pLAn, and through smart, bold investments in energy efficiency,” said Los Angles Mayor Eric Garcetti. “The progress we have made on ACEEE’s City Energy Efficiency Scorecard—moving up 24 places in just four years—shows just how committed we are to making our buildings greener, and creating a sustainable Los Angeles for the next generation.”

Phoenix is the fourth most-improved city, with a gain of 13 points. The city increased its score in community-wide initiatives because of its adoption of the 2050 Environmental Sustainability goals, which include both energy savings and climate goals.

“Phoenix has made major strides toward becoming a carbon-neutral, zero-waste city with an economy built for the 21st century,” said Phoenix Mayor Greg Stanton. “Phoenix exceeded its 2015 goal for reducing greenhouse gas emissions and is offering incentives to building owners to make their properties more energy efficient, working to make its own city buildings more energy efficient, and converting all 100,000 city streetlights to LEDs. This recognition is another milestone in what has been a historic sustainability comeback for Phoenix in just the past few years. Most recently, Phoenix began rolling out its voter-approved Transportation 2050 program—the largest green infrastructure investment in city history. We’ve already boosted bus service and dial-a-ride for our residents and will triple light rail in the next few decades. T2050 is a game-changer for Phoenix and puts us in prime position to remain at the top of the ACEEE rankings for many years to come.”

Orlando is among 11 cities that improved by at least 10 points. It aims to improve efficiency in existing buildings by benchmarking its energy use and making the data transparent and accessible.

“Over the last year, we have made great strides to dramatically increase the energy efficiency of Orlando’s buildings and transportation fleet,” said Orlando Mayor Buddy Dyer. “Through collaborations with our business, nonprofit, and academic community, we enabled the Property Assessed Clean Energy (PACE) financing tool that unlocked more than $500M for residential and commercial property owners and passed a historic energy and water benchmarking, transparency, and energy audit policy for the largest public- and private-sector buildings in Orlando. In addition, we’ve transitioned much of our city-owned fleet to alternative fuels and deployed millions of dollars to improve the efficiency of our city-owned buildings, saving taxpayers more than $1.4M from previous years. Through these efforts and others, we will continue to save significant amounts of money, reduce public health impacts and greenhouse gas emissions, preserve natural resources, and accelerate our local clean energy economy—all things that will improve the sustainability of our city.”

San Diego passed a Climate Action Plan that established goals to reduce energy use by 15% in select homes and to reduce community-wide greenhouse gas emissions emissions by 15% by 2020.

“This new ranking shows how far we’ve come in creating a more energy-efficient city in recent years,” said San Diego Mayor Kevin Faulconer. “We’re now the number one city for solar panel installations in the country, we are using cleaner-burning fuels in our city vehicles, and we have committed to powering our city by 100% renewable energy. With the passage of our landmark Climate Action Plan, we’re setting the example for how to build a better and cleaner future for the next generation.”