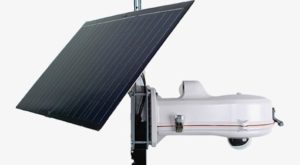 V5 PSU can be configured and installed in under 30 minutes and is packaged in a ruggedized enclosure for easy deployment and/or redeployments. It does not require trenching to connect the units to a power source nor does it require permits. The device allows for streaming video over Wi-Fi and is not limited or tied to fixed power or data cables. V5 devices can be added to extend existing security systems to the outdoors or be deployed as a standalone solution.

During a Saturday night football game on September 17, 2016, at a university located in Silicon Valley, a large group of people in the overflow parking lot became riotous. When campus police attempted to intervene, the crowd refused to leave and began to throw rocks and bottles at the officers.

While the university has a highly trained police force, their resources were not enough to quell the crowd and the local police department was called in for assistance. More fights broke out but the crowd eventually left through the three egress gates.

Unfortunately, the campus police did not have situational awareness of the crowd via video surveillance, so they did not have any video evidence of the perpetrators when they were throwing the objects or leaving the area.

The facility’s problem is typical of major collegiate and professional sports complexes. Parking lots, entries, and exits frequently have no video coverage, even though experience shows that such areas are often where excessive alcohol consumption and fighting break out. The absence of it is almost invariably due to the time-consuming difficulty and the expense of trenching to wire the system to an electrical grid. Additionally, very few facilities are willing to drill holes or break up the cement or asphalt around the campus.

When the riot occurred, the need for video surveillance became urgent. The Bay Area university needed it in place far sooner than a traditional security system could be installed. In short, it needed something that redefined the process of installing security.

At the time, the university was in the process of evaluating the V5 Portable Security Unit. For placement, V5 Systems sought input from the police at the university, knowing the customer understands the terrain and circumstances best. The company, which has its own experienced ex-police officers, sent the team to create a plan that would provide situational awareness of the areas where the crowds had gathered and become unruly. The goal was to set up surveillance that would obtain HD video of all persons and vehicles coming in and out of the access point to the stadium parking lot.

The V5 Portable Security Unit devices can be quickly set up to prevent future incidents, such as the riot at the stadium, as well as moved freely to other areas where crowds are anticipated.

The V5 Systems platform is a customizable security solution that enables customers to:

The V5 Portable Security Units were positioned at the college stadium strategically to detect problems and identify suspects. Following the installation, there were no more unruly incidents in the parking area during the remainder of the football season or to date.

Studies of behavior suggest peoples’ willingness to commit crimes, even when angry and under the influence of alcohol, diminish while they are aware they are under video surveillance. According to a study by Cornell University, video security resulted in a 51% decrease in crimes committed in parking lots.

Since the initial emergency purchase for the stadium, the university has bought dozens of V5 Systems’ PSUs and deployed them around the campus. The units have already assisted in the prevention of many crimes, including assault and battery, sexual assault, arson, and bike theft. Today, V5 Systems technology gives educational campuses the ability to be proactive in mitigating crimes and being prepared to prevent them wherever they might occur in the outdoors.