The term “penny wise and pound foolish” has been around for more than 500 years — and it holds true today as much as it did when it was first uttered so long ago. There are many interpretations of the phrase, but the one I like best is to be stingy about small things, only to have them cost you more in the end. Think of someone who buys cheap clothing, but has to replace it more often, or someone who doesn’t change the oil in their car because they don’t want to pay for the service, but end up having huge expenditures later due to lack of maintenance.

It’s this phrase that rattles around in my head when I get yet another phone call about “your shoddy rolling door that’s breaking all the time.” 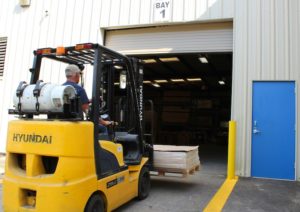 Yes, there are times when there are issues or errors in a product, but so often I see the wrong door installed because the right one was value engineered out of a project. It happens a lot with high performance rolling products, as they are more expensive than standard rolling doors — but there are very real, tangible costs to installing the wrong door that can more than double the cost of the less expensive option.

But the pull of value engineering is strong. You’ll need to convince a budget-strapped executive to keep a more expensive product in. A great way to convince them is to outline what will happen if they decide to choose the less expensive option. In the case of high performance rolling doors, it’s not pretty.

Putting a standard door in where a high preference one should be used will directly impact productivity in two significant ways:

First, consider timing. A standard service door can open at about eight inches per second. This can feel like an eternity if you’re driving a fork truck and waiting for it to open. Pausing, even for as little as 20 seconds to wait for a door to open, can end up costing hours and days of productivity in a 24×7 operation that uses the door for every pass through. Sure, you may not “see” those costs easily, but they’re there, and they’re expensive.

Then, consider maintenance delays: You may find that your door is often “out of service” or “closed for repairs” causing employees to reroute to a different door that’s further away. When you run a standard rolling door more often than is recommended, you can overheat the motor, wear out components, or even snap springs — rendering the door useless. 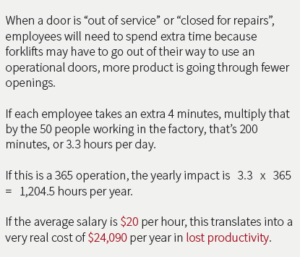 In contrast, high performance rolling doors open at speeds of up to 24 inches per second, and are constructed to withstand heavy continuous use. They don’t need maintenance outside of daily checks, and they can be springless, which removes another potential point of failure. The extra money spent on installing a high performance door will quickly be recouped through the increased steady pace of productivity.

In addition to the financial ramifications of lower productivity, there are other ways that a standard rolling door can lose you money. Speaking of money… if you own or manage a facility that requires a regulated temperature and you choose to install a standard rolling door, you might as well be throwing your money out that door every time it cycles.

Remember the speed issue we talked about earlier? That eight inches per second opening speed of a standard door is a long time for blustery winter winds to enter a facility, or hot summer temperatures to counteract air conditioning. This can impact your energy costs for the entire lifetime of the door. Again, these costs aren’t easily seen, but certainly felt in the wallet.

Your Safety Is At Risk

If losing time and money aren’t enough to convince you to fight to keep that high-performance door in a project, how about the safety and security of everyone working in your facility? A standard door is manufactured using springs which can fail if it is overused. A snapped spring will cause the door to slam shut, putting everyone at risk of injury.

In addition, standard rolling doors don’t come automatically with the most advanced light curtain safety technology. Often, they come with photo eyes at the bottom of the door, which are certainly safer than no safety precautions, but consider this example. One of your employees is carrying a 5’ long item on their shoulder while they walk through the opening of a rolling door. Once their legs pass the range of the photo eye it is no longer known that they are carrying a 5’ long item on their shoulder. The door could come down while the item is still in the opening, catapulting the item in the air while possible injuring them or people around them. Even with a photo eye and sensing edge, this damage is possible — damaged product, workmans’s comp — the list of costs can go on.

So, if you need to convince someone to keep a high performance door in a project, even though it’s more expensive, remember that a standard door installed where a high performance one is needed can cost you time, money, and safety throughout the lifetime of the door. It’s the definition of being penny wise and pound foolish.

Davuluri is director of product strategy for CornellCookson, a door and grille manufacturer. With facilities in Mountain Top, PA and Goodyear, AZ, the company offers a complete line of overhead door and closure products.