A diorama of wolves. A taxidermied moose. Massive paintings that won’t come unglued from the wall. These are just some of the challenges Minnesota’s only natural history museum, the Bell Museum of Natural History, has faced as it moves its entire collection from its home on the University of Minnesota’s Minneapolis campus. Beginning in January 2017, the museum began preparing its exhibits to move to a new state-of-the art facility on the university’s St. Paul campus.

In preparation for the new location’s summer 2018 opening, the museum’s exhibits had to navigate a challenging journey between two cities, across major roadways, and through a pair of busy campuses. Other natural history museums move exhibits or specimens from room to room all the time, so that’s nothing new. But rarely are entire collections moved from one facility to another. In fact, it may never have happened before.

“There are no other projects that have moved dioramas of this size, scale, age, and method of construction,” Andria Waclawski, communications director for the museum, told The Minnesota Post. “As far as we can tell, no other natural history museum has ever done anything like it.”

The museum’s move was spurred by the deteriorating condition of the original building housing the exhibits, which include 10 large dioramas. Rodents had invaded the building, the basement flooded, and temperature fluctuations threatened to damage the collections. In addition, there was not much room for a new building on the crowded Minneapolis campus, so plans were drafted to construct a new building on the university’s St. Paul campus.

But how to get some of the best exhibitions and dioramas in the nation into the new facility?

Enter Wolf Magritte, a company that specializes in moving large-scale artifacts. And boy, did they have their work cut out for them.

Here’s one example: Canvas paintings from the walls of the old museum could not be removed to be installed in the new facility because they were so strongly adhered to the walls by lead glue. Crews had to cut the diorama walls in areas where it wouldn’t be as noticeable when put back together, then build a giant steel frame to lift large pieces of wall out at once. Thankfully, the lead glue that made it impossible to remove the paintings from the walls, also kept the walls together as they were moved.

Getting the giant pieces out of the building was also a challenge: The front door wasn’t big enough. So crews cut a giant hole in the side of the old Bell Museum, and rolled all 10 of the dioramas out on steel dollies.

Work on the new building is supposed to finish soon, with the exhibits set up and ready for the public next summer. Learn more about the museum’s big move—including what happened with that moose—here. 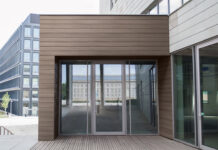 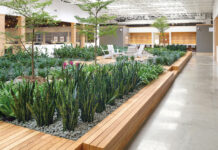 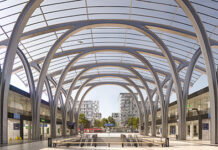