The use of cell phones in the workplace is taking precedence over desk phones, especially among millennials, according to the Workplace Connectivity Survey from Zinwave, a provider of Distributed Antenna System (DAS) solutions for in-building wireless. The survey results show an increasing shift in dependence on mobile devices for work, reinforcing the need for employers to provide fast and reliable wireless signals at the workplace. 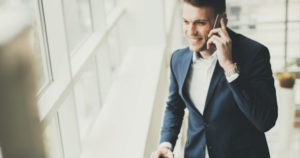 The Workplace Connectivity Survey questioned 1,021 office, industrial, and healthcare workers on their preferred tools for internal and external communications at the workplace. In addition, respondents were asked about their use of a cell phone or tablet for data access.

Key findings included that with the increasing use of cell phones at work, 11.7 percent of respondents never use their desk phones for in-office communications, and some employers have stopped providing desk phones altogether.

In addition to voice calls, the survey found an increase in text messaging as a tool for communication at work, with 52.5 percent of respondents texting colleagues and other internal contacts, and 51.7 percent texting clients, vendors, partners and other external contacts.

The results reflect the findings of a previous report conducted by Zinwave that found millennials demand constant connectivity, and that as a group they were 68 percent more likely to complain about frequent problems with cellular coverage in the workplace than their older coworkers.

“The incoming millennial workforce has spoken, and they have made it clear that they want to use their mobile devices at work,” said Scott Willis, President and CEO of Zinwave. “The results of the Workplace Connectivity Survey confirm that employers need to support mobile technologies in the office.”

Other key findings of the survey include:

In light of these findings, Zinwave suggests employers consider DAS options to facilitate their workforce’s preferences for communication. The full version of the report can be viewed online.