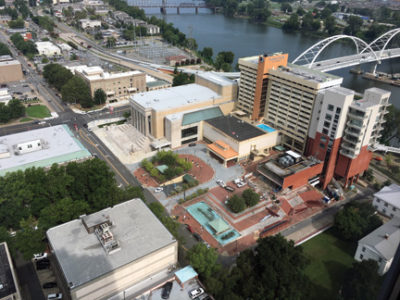 By Anne Cosgrove
From the October 2017 Issue

After a 28 month hiatus, the Robinson Center in Little Rock, AR reopened in November 2016, completely transformed. Built in 1939 as a federal WPA (Works Progress Administration) project, this performing arts center is a valued piece of the city’s and central Arkansas’ history and culture. When it closed for renovation and restoration in July 2014, it had served as an entertainment hub for 76 years—including as the site of the first live recording of “Hound Dog” by Elvis Presley in May 1956. 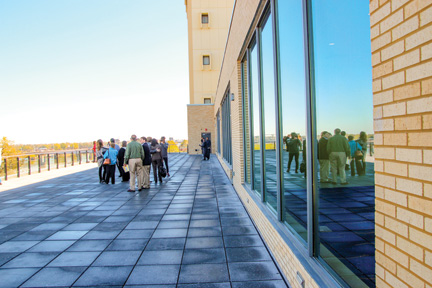 Owned by the City of Little Rock, capital city of Arkansas, and operated by the Little Rock Convention & Visitors Bureau (LRCVB), Robinson Center was approved for a $70 million renovation, restoration, and expansion by voters by special election in late 2013. Financing for the project was bonded with funds provided by the existing 2% Little Rock Advertising & Promotion (A&P) tax. This approval came after the LRCVB had presented a year-long feasibility study focused on the best way to address the building’s aging infrastructure and outdated amenities. In 2010, the A&P Commission had given the in-house architect the go-ahead to perform the study.

Jim Rice, senior vice president and COO, operations division at LRCVB, recalls, “We did not know what the best approach would be—whether Robinson Center could be renovated, or whether we should tear it down and start over. With its position on the National Register [of Historic Places], and because so many residents in the city and central Arkansas had history with the building, tearing it down would have been difficult. We needed to find out the capabilities of the building.”

In 2011, the feasibility study was presented, and the recommendation was the save Robinson Center. “The bones were very good, but it was very old and would have to be completely gutted,” Rice explains. With Gretchen Hall, LRCVB President and CEO, Rice headed up the Robinson Center project team, during which time he and Hall attended weekly meeting with their entire project team to ensure the final result met expectations.

A Chat With Jim Rice

As senior vice president of operations for the Little Rock Convention & Visitors Bureau (LRCVB), what is the scope of your responsibilities?

The scope of my position includes the overall general management of the Statehouse Convention Center, Robinson Performance Hall and Conference Center, the public facilities within the River Market Entertainment District and as primary liaison between the two city owned convention hotels and their leaseholders. I also manage all downtown parking facilities servicing the hotels and meeting facilities, approximately 2,000 spaces.

During your tenure at LRCVB and in facility management, what is a notable development that has changed how you do your job?

The two major industry (and global) developments that have changed the entire scope of our responsibility are patron and property safety and security philosophies and procedures, as well as the social responsibility of pursuing sustainability endeavors in all that we do.

New Life For The Building, And LEED Certification

Unveiled in November 2016, the renovations provide patrons with all the conveniences and modern amenities they have come to expect. While the project was a near total transformation, the four exterior walls and six columns at the front entrance remain, after careful restoration. Additionally, the Robinson Center historic lobby was restored.

The auditorium was reimagined, with acoustics, seating, and all accompanying elements brought up to current standards. LRCVB hired leading firms in those fields to ensure the space would provide performers and guests a state-of-the-art experience. Robinson Center regular partners include Celebrity Attractions, which presents Broadway shows; the Arkansas Symphony Orchestra; and Ballet Arkansas. During construction, the Broadway and Symphony presentations moved to a local high school that housed a new auditorium.

These partners have returned to Robinson Center, and their subscriber base and attendance overall has increased in the new facility. In August, reports noted there had been 174 events held since the November 2016 reopening, totaling almost 195,000 patron days.

In the auditorium, the stage is 30′ lower than before the project; and that is just one of the many improvements occupants now enjoy. Interior spaces reconfigured to provide enhanced acoustics, updated interior finishes, new media technology, dressing room upgrades, expanded loading dock and storage areas, expanded public lobbies and restrooms, on-site box office, a new centrally located grand stair to link multiple lobby levels, and new public drop-offs and parking garage vestibules were all included in the project.

The project encompassed the entire Robinson Center, and part of this is a new 30,000 square foot conference center built on the north side of the facility. Overlooking the Arkansas River, the new conference space features a large outdoor terrace. The original structure featured meeting rooms under the facility’s auditorium. Seven decades later, this conference space was still utilized, but did not meet the needs or expectations of current event planners and attendees.

Embarking on this complete overhaul of Robinson Center, the project team identified LEED Certified as a baseline goal. The City of Little Rock has a number of LEED certified buildings in its portfolio, and this project continued that progress.

Of the decision to make this a LEED project, Hall explains, “First and foremost, there was a focus on cost savings in the long-run. But, also our city has made a commitment in many of the public facilities ensure that we are being sustainable, and that we are pursuing certification for sustainability efforts. So it was really a project goal from day one.”

In August 2017, the facility was awarded LEED Gold certification (with 61 points), two levels above the pre-set Certified goal. “We never considered the project without it. We just exceeded our expectations,” says Rice. “And I say ‘we’ because it was due to all of the professionals involved at every level. If [reaching LEED] meant doing something a different way, or buying a different product, we discussed it. We met every week, and Gretchen and the Mayor [Mark Stodola] led the effort to make the right decisions.”

Additionally, 57% of building materials are Regional Materials (extracted and produced within 500 miles of the project site). Building materials used in the reconstruction contain 39% recycled content.

LRCVB has made a two-year commitment to purchase 70% of the building power from renewable power sources. For the green power credit toward LEED certification, the facility purchases green power offsets. This purchase consists of 2,471 RECs, with each REC is equal to one MWh; these RECS are linked to wind energy sources.

LRCVB also established a sustainable purchasing program for evaluating all Robinson Center purchases of goods and supplies. Hall explains that a recycling program already in place in other city buildings has been implemented at Robinson Center. Additionally, green purchasing focuses on cleaning products, papers products, and related items.

Approaching the first full year of operation after this transformation of Robinson Center, Hall reflects on the impact on the core business of the facility. “We exceeded our expectations on the LEED certification, while also exceeding our expectations on the sheer number of events and the diversity of the event offerings that we’ve had since reopening,” she says.

When asked about the impact on back-of-house facility operations, Rice quips, “It’s much easier on the maintenance and engineering staff, because they are working with all new equipment. All of the systems function as they were designed to do, so that in and of itself makes it easier to operate. Today, the Robinson Center is operating as an efficient building at every level.” 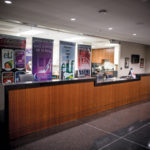 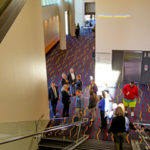 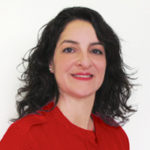 This article is based on project literature and an interview with Hall and Rice. To learn more about the Robinson Center operations and this project visit www.robinsoncenter.com.

Do you have a comment on this article? Share your thoughts in the Comments section below or send an e-mail to the Editor at acosgrove@groupc.com. 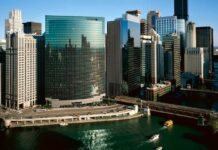 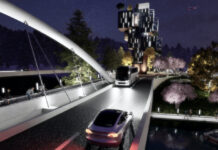