Facility expansions, renovations, department relocations, and rebrands are commonplace in today’s healthcare facilities, and are necessary to remain relevant in today’s highly competitive marketplace. However, these projects often result in complicating facilities in a way that make system maintenance a logistical nightmare for facility management teams. In an effort to limit disruption and to improve patient and visitor navigation, healthcare systems are trending toward standardizing their wayfinding and signage logic, design, programming, and implementation practices. 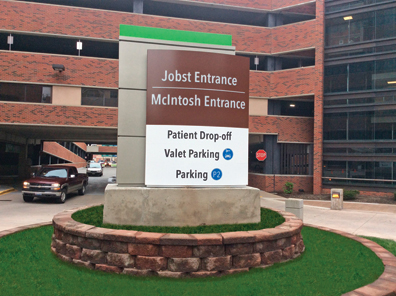 Wayfinding consultant Corbin Design defines wayfinding simply as “direction for people in motion.” Wayfinding is the practice of providing visitors with signage and other visual cues to orient and guide them through a complex environment. A wayfinding system should be intuitive for a first-time or infrequent visitor and only needs to provide information needed to get from one navigational breadcrumb to the next.

ProMedica Health System (ProMedica), which spans 27 counties in Ohio and Michigan with 13 hospitals and numerous healthcare centers, underwent a rebrand in 2011. Though the system-wide rebrand came with many challenges, it offered ProMedica an opportunity to standardize wayfinding practices across the system. ProMedica representatives from brand design, system construction, facilities, and operations started working with Corbin Design in 2013 to develop a consistent, changeable, cost-effective wayfinding system with the intended outcome of saving time and money from one facility to the next.

Logic Consistency. Early on ProMedica identified that the wayfinding and signage standardization needed to be more than just design-based; it required a consistent logic that could be applied throughout the entire system. To do this, ProMedica’s flagship and most complex location, ProMedica Toledo Hospital (PTH), was selected as the first location for the new system-wide wayfinding standards.

“Toledo Hospital is our tertiary campus and has the highest number of employees, medical staff, learners, patients, and visitors…,” says Alison Avendt, PTH president of ProMedica Transportation Network and vice president of operations. “Many of our patients and visitors come from the 27 counties that we serve and are unfamiliar with the hospital campus and surrounding area. In addition, coming to a hospital is a highly stressful activity so it made sense to start with ProMedica Toledo.”

After analyzing several ProMedica hospitals and their master plans, including PTH’s plans for a future patient bed tower, campus expansion, and road redevelopment, a consistent logic of identification for key wayfinding anchors—campus entrances, parking, building entrances, and public elevators—was created. “If we can get it right at PTH, we can get it right at all ProMedica locations,” says Hesper Smyth, lead designer at Corbin Design.

Design Consistency. To support the new logic and reinforce the brand, Corbin Design created new interior signage design standards and refined the exterior signage design standards. The original exterior signage design, created by architects HKS, Inc., used a beacon green color as a design element to connect the brand to the signage and mimic the green LED detail along rooflines that helps identify ProMedica facilities. As the exterior and interior designs evolved, the beacon green was used throughout to not only associate to the brand, but also to create consistent and intuitive signage throughout the ProMedica system.

Knowing that the sign system has to evolve as the facility does, the exterior directional sign design features modular individual message panels that are easy and cost-effective to update and replace. At PTH, the hospital is currently undergoing major exterior construction, and the individual message panels have been updated through each phase of construction to redirect traffic.

“Once the wayfinding methodology was developed it has been fairly easy to use that as our guideline as we have updated and changed signs as the campus site and roadways changed,” says Avendt.

Similarly, the interior signage standard was designed to accommodate the evolution of the hospital. The new signage system needed to allow each facility to manage signage updates easily and, in the case of PTH, adjust traffic flows during construction without making the entire facility look like a work zone. Paper-based insert signs were designed to allow for quick and efficient updates to sign types ranging from maps and directories to room identifiers. When changes are needed, facilities can refer to the signage standards to manage the updates whether this be through in-house print capabilities or local print shops.

In an effort to standardize destination names, these documents were then utilized by PTH’s facilities team to update internal maintenance software system location directories, and by the hospital’s operations team to develop visitor map handouts.

Implementation Consistency. Once a wayfinding standard is created, a facility has the tools it needs to implement a successful and consistent system. To ensure quality, consistency, and cost-effectiveness, ProMedica decided early on to pre-qualify fabricators so that individual facility teams did not have to bid out each project. The original bid for PTH negotiated three years of pricing for additional sign orders. The pre-qualification process, led by Corbin Design, ensured that approved fabricators had appropriate experience and capabilities for the project. “Using a pre-qualified fabricator who has been working with the standards assures that the design intent is being honored,” said Smyth. This process allows ProMedica facilities to work directly with the pre-approved fabricators, resulting in more accurate project budgeting, faster implementation timelines, and consistency throughout the ProMedica sites.

Having installed the wayfinding system at PTH first, other ProMedica hospitals have had the benefit of witnessing improvements to patient experiences and maintenance processes. Since installing the PTH wayfinding system in early 2016, ProMedica and Corbin Design continue to work together to implement the standard at their other hospitals and care sites.

O’Polka and Stevens are project managers at Corbin Design, a wayfinding analysis, master planning, signage standards design, sign planning, and implementation services firm located in Traverse City, MI. Having joined the firm in 2012, O’Polka is a main client contact, tracking all details of her projects and facilitating teamwork between client teams and Corbin Design.

Stevens joined the firm in May 2017 with six years of project management and technical writing experience at an engineering firm. He serves as the primary client contact on his project teams, working to ensure that each project stays within budget and on schedule. 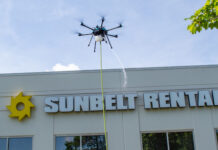