We’ve all had a bad day at the office. Too much work, a crabby client, an annoying coworker—these are all to be expected in the normal course of a career. But some of us have had some really bad days. In a new survey from staffing firm OfficeTeam, senior managers were asked to recount their most embarrassing moments at work.

Here are some of their responses:

Tech troubles were a common theme:

Others suffered a case of mistaken identity:

Finally, these bloopers gave managers something to chew on:

“Experiencing the occasional embarrassing moment at work is something we can all relate to,” said Koula Vasilopoulos, a district president for OfficeTeam. “Recover smoothly and avoid any prolonged awkwardness by staying composed and responding with a sense of humor.”

The survey was based on responses from more than 300 senior managers at companies with 20 or more employees in Canada and the United States. 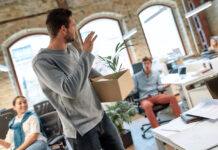