The City Council of the City of Los Angeles, CA has selected Angels Landing Partners LLC — a 100% minority-owned team comprised of the Peebles Corporation, MacFarlane Partners, and Claridge Properties — to manage development of the planned Angels Landing Site. As part of the plan, the team will build the tallest building in the Western U.S.

“Our team is inspired by the great opportunity to transform the Los Angeles skyline with our iconic building, enhance residential life downtown, and forever change how large buildings are built in Los Angeles by ensuring that all residents and businesses receive equal access to career and business opportunities,” said Don Peebles, Chairman and CEO of the Peebles Corporation. “We look forward to working with the City of Los Angeles and their team, Council member Jose Huizar and the Chief Legislative Analyst, Oscar Ixco.”

Following unanimous approval from the City of Los Angeles Economic Development Committee, the full City Council approved the approach by the team to develop the 2.24-acre site at Fourth and Hill Streets. The estimated budget, including acquisition, is $1.2 billion with a construction phase expected to run for 41 months with completion due in late 2024. 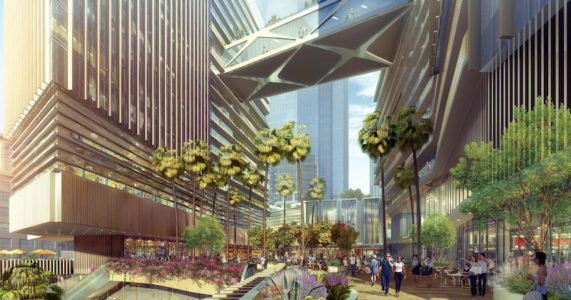 The winning plan aims to increase pedestrian flow and activity, engage the public, and activate the site and surrounding neighborhood. The proposed transit-oriented development will provide a better experience for Pershing Square Metro Station commuters as well as pedestrians by increasing accessibility to the site—currently, one of the major issues affecting the difficult hill-like structure. In addition to building two towers, one of which will be the tallest residential building in the Western U.S. standing at 1,000 feet, the master plan for the mixed-used development will deliver approximately:

The design team is led by Handel Architects and OLIN. Handel, which will oversee the design, recently completed one of the most critically-acclaimed high rises in Los Angeles, Ten Thousand Santa Monica. OLIN, best known for The Plaza at Santa Monica and ONE Beverly Hills, will handle the landscaping.

Angels Landing Partners is a collaboration between two of the leading minority-owned national real estate development firms in the country and a local minority-owned real estate developer. The team is committed to a transformative inclusionary process by providing contracting opportunities for the project to minority and women-owned businesses. Their goal is to exceed the M/WBE requirements and generate significant employment opportunities, with a focus on strengthening the middle class.