Many North American colleges and universities are pursuing a high-risk strategy to build new campus facilities as a way to reverse lagging student enrollment, according to a new report from Sightlines, a Gordian company and leader in facilities intelligence and analysis for higher education institutions. 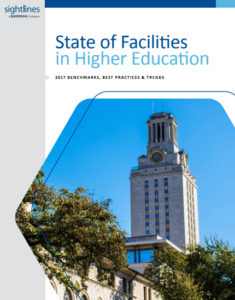 The 2017 “State of Facilities in Higher Education” report from Sightlines found that, overall, there was more than 10 percent growth in campus space from 2007-2016 (the most recent period for which data is available), eclipsing enrollment growth of just 8 percent for the same 10-year period. This is the fourth consecutive year Sightlines has documented a trend of space growth outpacing enrollment growth on North American college campuses.

“In light of the facilities management challenges facing higher education institutions — notably large segments of aging building stock and flattening if not declining enrollment trends — it’s extraordinary to see that many higher education decision-makers are choosing to add new buildings to their campuses,” said Mark Schiff, president of Sightlines. “While our research indicates that institutions are taking steps to invest more strategically in facilities resources, the vast majority continue to underestimate the renewal needs of deteriorating spaces while pushing high-risk investments into new facilities.”

The study includes data from 366 higher education institutions in the U.S. and Canada, with a collective enrollment of 3.1 million students and 1.5 billion total square feet of campus space, including more than 52,000 buildings. Approximately 40 percent of the institutions in the study were private and 60 percent were public.

Other highlights in the 2017 report include:

“Given the demands of managing more space with fewer resources and at greater impact to the institution’s overall recruitment and retention goals, successful facilities departments are being pushed to develop creative responses to these challenges,” said Schiff. “Every campus we see developing effective solutions has in place programs to analyze objective data and utilize comparative metrics to track performance, communicate accomplishments and articulate needs to the community or leadership.”

The 2017 “State of Facilities in Higher Education” report analyzes new trends in higher education space management, provides insight into the challenges impacting campus facilities, and shares best practices for how college leaders can fund and manage their facilities in light of these challenges. The full report is available online.