On Wednesday, Puerto Rico plunged into an island-wide blackout with a power outage across the entire U.S. territory. Economics research firm Rhodium Group reports that more than 3.4 billion hours of electricity have been lost on the island — marking the second-largest blackout in world history. This is the first time since Hurricane Maria hit Puerto Rico in September 2017 that the island has experience a full power outage.

If you’re interested in the recent history of power outages across the United States, global power management company Eaton recently released its 2017 “Blackout Tracker Annual Report”. Eaton has tracked power outage information since February 16, 2008 in an effort to educate visitors on the causes and impact of power outages. 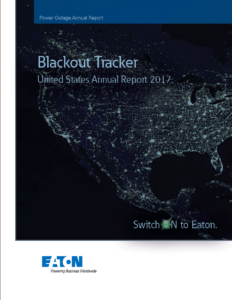 This year’s report found that in 2017 nearly 27 million people were affected by 3,526 blackouts lasting an average of 81 minutes per power outage. While California topped the list of states with the most interruptions for the ninth consecutive year, power failures impacted individuals and businesses in all 50 states.