The U.S. Environmental Protection Agency (EPA) recognizes federal facilities for conserving resources and saving taxpayers’ money as part of the Federal Green Challenge (FGC). These efforts across the federal government have not only resulted in approximately $22 million in cost savings in the last year, but also further the goals of a May 17, 2018 Executive Order (EO) Regarding Efficient Federal Operations. 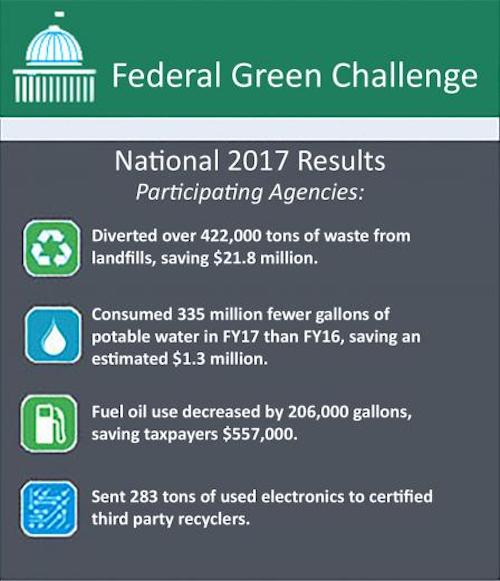 FGC participants are leading the way in advancing the goals of the President’s EO, which directs agencies to prioritize reducing waste, cutting costs, enhancing the resiliency of Federal infrastructure and operations, and that these reductions should be tracked to ensure accountability.

EPA has awarded the following participants for their efforts in improving the efficiency of their facilities in FY17:

The FGC is a voluntary, fiscal yearlong commitment under EPA’s Sustainable Materials Management (SMM) Program, in which participants focus on efficiently managing their resources to reduce the costs of building operations, maintenance, and supplies. Read more about these National Winners as well as Regional Winners at www.epa.gov/fgc.