In New York City, a series of deadly outbreaks of Legionnaires’ Disease has become an all too common occurrence. Over the last few years — including the most recent events this summer in Manhattan — hundreds have been severely sickened and dozens killed by deadly bacteria that proliferates in water systems like the cooling towers used in conjunction with large HVAC systems. 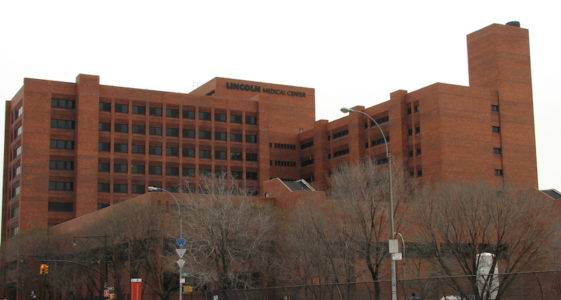 So, when a cooling tower supporting the HVAC system at NYC Health + Hospitals/Lincoln was nearing its expected end of life, the management of the 362-bed hospital in the South Bronx saw an opportunity. The year before, the neighboring community had experienced outbreaks of Legionnaires’ disease, and even though the hospital’s cooling towers played no role in those outbreaks, the chance to increase protections against possible future exposures of the bacteria that cause the disease was an important consideration.

Accordingly, the hospital’s engineering and management teams prioritized the selection of an anti-microbial cooling tower option. They also gave extra weight to finding a system that would save energy, consistent with the larger health system’s ongoing goals.

Legionnaires’ disease is a severe form of lung infection caused by exposure to bacteria known as Legionella. Found naturally in freshwater environments like lakes and streams, Legionella becomes a health hazard when it grows unabated in water that is not properly treated. While this can include shower heads, hot tubs, and hot water heaters, cooling towers are often found to be the source of outbreaks.

Cooling towers have a long history of effectively expelling heat from the water used in many commercial and industrial applications. However, a recent study from the Center for Disease Control and Prevention (CDC) found that an overwhelming majority of the cooling towers they tested contained Legionella DNA. This indicates that the dangerous bacteria was either currently present or had been at some point, and without proper precautions would eventually give rise to an outbreak.

NYC Health + Hospitals/Lincoln, a large, full-service community medical center and teaching hospital—part of the largest public health care system in the U.S.—knew what was needed. Louis Iglhaut, associate executive director at NYC Health + Hospitals, led the team responsible for the specification, acquisition, and installation of the new cooling towers. 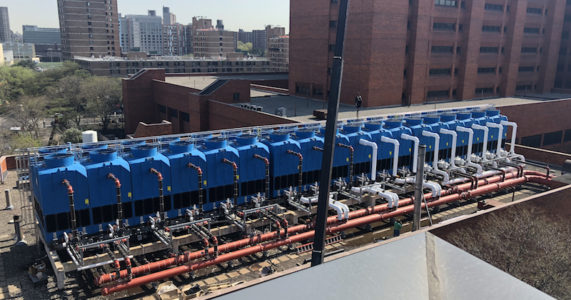 Originally, one of Iglhaut’s primary design priorities for Lincoln Hospital’s new cooling tower was to focus on efficient and thorough water circulation. In other words, the design of the new towers should not have corners in the basin, as many do, including the stainless steel models the hospital was replacing.

“We needed to think outside the box,” explained Iglhaut. “Given our concern about the dangers of microbial growth, we decided to only considering towers with rounded basins.”

Iglhault’s search for a superior design lead his team to find a new breed of cooling towers that had just recently become available. Fully-compounded with an anti-microbial resin, these advanced technology towers contain wide-spectrum additives that operate on a cellular level to continuously disrupt and prevent uncontrolled growth of microorganisms and biofilm.

“These towers, which are rounded, not only solved the circulation problem but also have anti-microbial chemicals embedded into the tower’s HDPE material, which helps to prevent the growth of dangerous bacteria such as Legionella,” he said.

The towers the hospital selected were made by Delta Cooling Towers, which introduced the HDPE (high-density polyethylene) cooling tower in the 1970s. 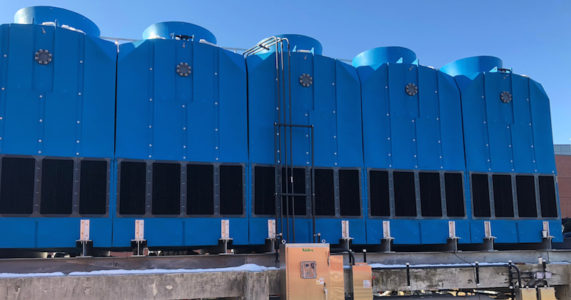 While some cooling tower manufacturers now market a tower with an anti-microbial fill (the medium over which the hot water is distributed as it is being cooled), a vastly better option is to have a cooling tower featuring the fill, structural casing, and sump all composed of anti-microbial material.

This is highly significant because biofilm growth and microorganisms allow a place for bacteria to hide from chemical treatments and also provide nutrients for pathogen growth.

Convinced that the rounded design, HDPE durability, and protective features of the anti-microbial material were a good solution for Lincoln Hospital, the procurement team selected Delta’s Anti-Microbial TM Series model with 18 modular cooling towers that provide a combined total of 6,000 cooling tons.

To reduce future outbreaks, cities like New York are increasingly requiring extensive use of harsh chemicals to be used within all cooling towers. For Lincoln Hospital, this requires a professionally maintained water treatment program that uses strong biocides and acid feed treatment chemicals. While these could have a life-shortening corrosive effect on even stainless steel towers, engineered plastic HDPE towers can withstand even the harshest chemicals.

“I think that the corrosion resistance of these HDPE towers is demonstrated by the manufacturer’s 20-year warranty,” said Iglhaut.

Another major factor affecting Lincoln Hospital’s decision to adopt the new Delta cooling towers was the promise of substantial energy savings. New York City Health + Hospitals was well aware of the city’s mandate to save on energy, so it teamed up with the country’s largest state power organization, dedicated to innovative and energy-efficient infrastructure.

“We worked with New York Power Authority to ensure that the new cooling towers would be as energy-efficient as possible,” Iglhaut said. “Our old towers used large, 30-horsepower fans on each unit, which required the use of a lot of electric power. The new modular units are equipped with smaller horsepower, 60-inch fans, so the energy consumption is far less.

“Also, we have installed VFDs (variable-frequency drives), which will give us even more savings,” he continued. “The total electric power energy savings calculated by our engineering firm was figured at about 40 percent, which is quite an accomplishment.”

Even the installation of the new cooling towers added to efficiencies, Iglhaut added. Because the towers were smaller and lighter, the installation team was able to use a small crane to lift the towers into position, which ensures a seamless transition from the old system to the new one.

“Sometimes I think people like engineers should be judged by things that don’t happen in the hospital,” he said. “In this case, the cooling towers went in seamlessly without interruptions to any patient areas. It was up and running with zero downtime.”