It’s hard to imagine a better place for urban legends and ghost stories to flourish than a college campus. Often very old places inhabited by young people with vivid imaginations and lots of time on their hands, many college campuses are proud of their spooky stories and historical hauntings.

Just in time for Halloween, College Consensus has complied a list of the Top 10 Most Haunted Colleges in America.

To compile the list, College Consensus identified the colleges and universities that have a long-standing, well-documented reputation for hauntings, and ranked them by their College Consensus score, which combines published academic rankings and real student reviews.

“Any college worth its salt has a ghost story or two – it’s a long-standing part of college lore,” explained College Consensus Managing Editor Carrie Sealey-Morris. “They serve a lot of purposes — upperclassmen may use them to mess around with the freshmen, making sure they sleep with the lights on in their ‘haunted’ dorm for the first few weeks.”

“Some haunted colleges and universities go the extra mile, with a whole fright of ghosts […] and timeless stories to go with them,” Sealey-Morris continued. “Broken-hearted ghosts who haunt the dorms where they took their lives, or mischievous poltergeists re-arranging books in the library; they may be lost soldiers from the the Revolutionary War, or freaked-out acid casualties from the 1970s.”

Most important of all, according to Sealey-Morris, these are “home-grown stories that give students, faculty, and alumni a sense of belonging, and a sense of history a little different from the important milestones and influential figures that make up the dry, ‘real’ story.”

The Most Haunted Colleges, Sealey-Morris admits, cannot be an objective ranking: “We’re not looking for ‘real’ ghost stories,” she said.

But College Consensus does have a method to this autumnal madness. The ranking was developed “by looking for colleges that not only have a substantial history of ghost stories attached to them, but for those that embrace their status as the most haunted colleges in America.”

Using that criteria, the Top 10 Haunted Colleges are:

First on the haunted hit list, Smith College has been around since 1871, which has given the school plenty of time to develop some home-grown ghost stories. With buildings dating back to the Colonial Era, Smith has centuries of accidents, murders, and epidemics to draw from. It might be the top-ranked Women’s College in the U.S., but it’s also one of the most haunted colleges in New England.

Here’s why, according to College Consensus: Smith’s website features a continually-updated listing of all of the campus ghosts that have been reported, and their respective stories. The most famous story — and most heartbreaking — centers around the Sessions House, built in 1751, where star-crossed lovers would meet in a hidden stair: one, a British soldier, the other, an American girl. Their ghosts reportedly still haunt the house, and naturally, the hidden staircase is real — new residents are traditionally tasked with finding it on Halloween. Other ghosts include a senior who died after forgetting to turn off the gas oven, a little boy who died after being locked in an attic, and a broken-hearted mother who walks the floors with the crying baby she murdered.

Curious about how the other schools earned their ghostly ranking? Read more here. 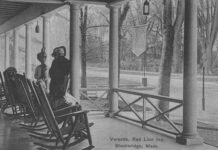