Home » Topics » Security » Violence In Emergency Departments On The Rise

Violence in America’s emergency departments is increasing, causing harm to physicians, staff, and patients, according to new research. Nearly half (47 percent) of emergency physicians report having been physically assaulted while at work, with 60 percent saying those assaults occurred in the past year. Nearly 8 in 10 also say that patient care is being affected, with 51 percent of those saying that patients also have been physically harmed.

The results of a poll of more than 3,500 emergency physicians across the nation were released alongside new research about violence in Michigan emergency departments, presented at the annual meeting of the American College of Emergency Physicians (ACEP), ACEP18/Scientific Assembly. The poll was conducted by Marketing General Incorporated. 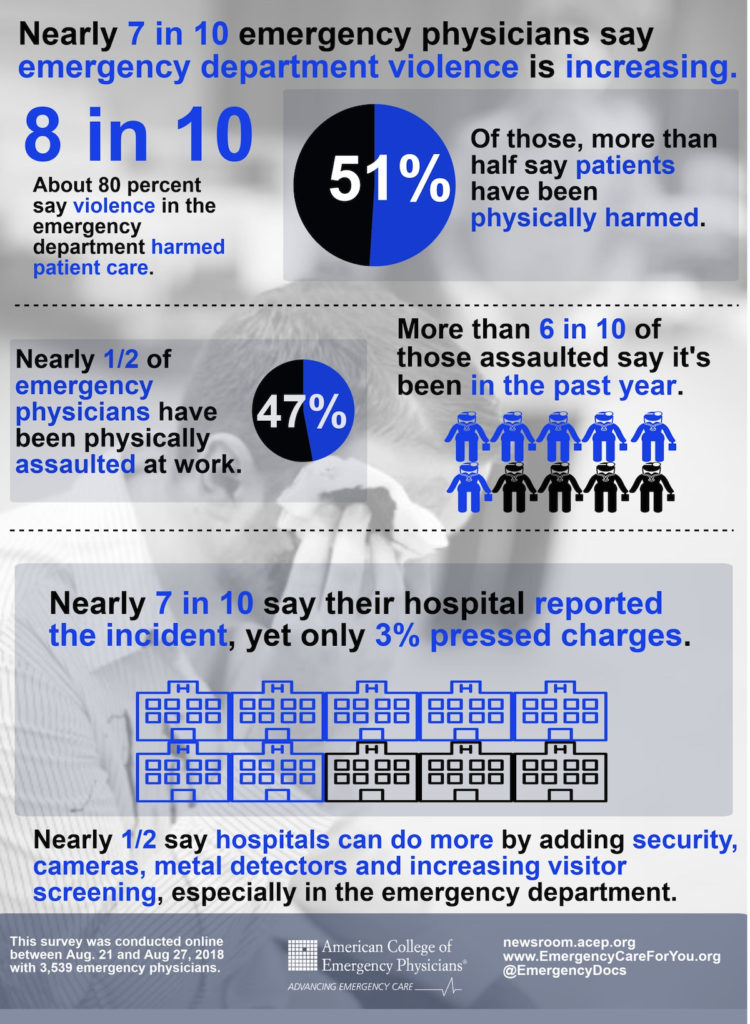 “More needs to be done,” says Vidor Friedman, MD, FACEP, president of ACEP. “Violence in emergency departments is not only affecting medical staff, it is affecting patients. When violence occurs in an emergency department, patients can be injured or traumatized to the point of leaving without being seen. It also can increase wait times and distract emergency staff from focusing on other patients who urgently require a physician’s assistance.”

Nearly 7 in 10 say violence has increased in the past 5 years, with 25 percent reporting it is increasing greatly. Almost half (49 percent) of all respondents say hospitals can do more by adding security guards, cameras, security for parking lots, metal detectors, and increasing visitor screening inside hospitals, especially in emergency departments.

Dr. Friedman says nearly all women who are emergency physicians (96 percent) reported that a patient or visitor made inappropriate comments or unwanted advances toward them, and 80 percent of men reported the same.

More than a quarter (27 percent) of emergency physician who were assaulted in the past year, say assaults occurred more than once. Nearly a third (27 percent) of those assaulted got injured. About half of those injured (44 percent) reported being hit or slapped. Almost one-third say they have also been either punched, kicked, or spit upon. Almost all (97 percent) say a patient committed the assault. A quarter (28 percent) reported that they had been assaulted by a patient’s family member or friend.

A new study (“Reassessment of Violence Against Emergency Physicians”) published in the Annals of Emergency Medicine and presented at ACEP18 found that despite increased security measures in Michigan, the problems of emergency department violence are getting worse.

“Emergency physicians across all demographics experience various forms of violence and are increasingly concerned about becoming a victim of violence,” says Terry Kowalenko, MD, FACEP, an emergency physician in Michigan and co-author of the study. “Despite increased risks, our research found that there is very little published on topics such as situational awareness, verbal de-escalation, self-protection techniques, or weapons awareness for emergency physicians to use.”

Other findings of the poll include:

This poll was conducted online between August 21 and August 27, 2018, with 3,539 emergency physicians. Click here for complete poll results.