The trend of welcoming pets — usually dogs — in the workplace has become commonplace. It’s probably safe to say each of us, or someone we know, regularly spends some of their work days with a dog. In fact, here at Facility Executive we are happy to have Patty, our unofficial office dog, greet us at the door most mornings.

But a Long Island, NY company has put a new spin on the pets in the workplace trend.

SupplyHouse.com, an e-commerce company that sells plumbing, heating, and HVAC supplies, recently modified its in office pet policy to allow pigs. Earlier this month, employee Steve Erickson brought his pet pig, Truffles, into the office for a day of snorts and tail wagging. 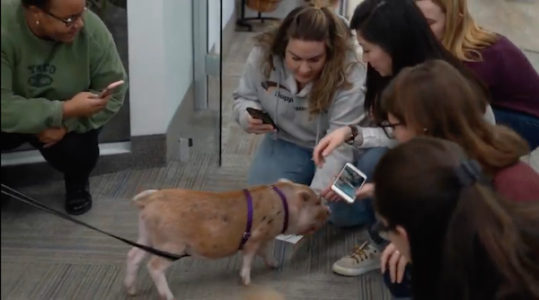 While dogs tend to be the norm around the pet-friendly office, Erickson was eager to bring in his ­­now 24-pound pet pig.

“I really enjoyed seeing everyone bring their dogs in the office,” said Erickson. “Once I got Truffles, I thought it would be so much fun to introduce my new pet to my coworkers. Plus, it was right around the same time as the Chinese New Year, and it just so happens to be the year of the pig. The timing was perfect.”

Considering a pig has never been to the company’s headquarters before, Erickson reached out to the Human Resources department in hopes that a pig would fall under the current pet policy.

“We implemented our pet policy about three years ago now,” said Julie Collins, Human Resources Associate. “I was a little nervous [to have a pig come into the office] because dogs have been the only four legged friends to join us up until now, but they [dogs] bring so much joy and I knew a pig would do the same.”

Employees were thrilled to hear that a pig was going to be visiting the office.

“It felt like when Ed Sullivan introduced The Beatles, everybody was so excited,” said Erickson. “There was a build up for a few days of everybody asking when she was coming. I imagine there’s not a lot of workplaces that would have let me bring her in.”

Now both dogs and pigs alike are welcome in the office, whether it’s for a few hours or the whole day. Such opportunities allow employees to get to know one another a bit more through their four legged friends.

SupplyHouse.com focuses on providing a positive and energetic work environment allowing for employees to feel right at home. With its core values revolving around open-mindedness, teamwork, and respect, Truffles’ guest appearance was a perfect fit.

As Farmer Hoggett said to his own hard-working pig in the movie, Babe, “That’ll do, pig. That’ll do.” 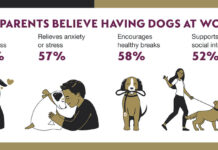 What Are The Benefits Of Dogs In The Workplace? 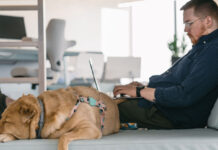