EvaClean is a touchless electrostatic disinfection and sanitizing system built around one standardized process and a safer chemistry with two advanced products—Protexus sprayers and PURTABS. 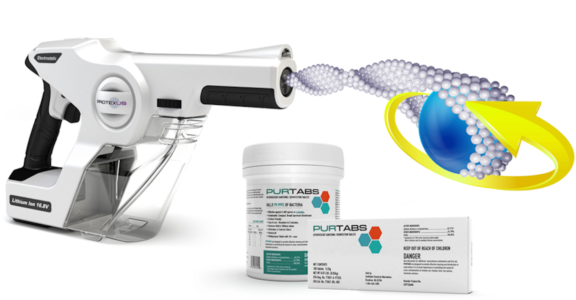 Bill Sivori, Project Manager at Able Services San Francisco, does things differently than most. First, his contract cleaning business is devoted to a single client. But, that one account happens to be the largest landowner in San Francisco, with a four-building complex covering four square blocks, a total of 3.2 million square feet of Class A offices, 1.2 million in retail space, as well as the tallest building west of the Mississippi located a few blocks away. Sivori’s office is based in those very same buildings and once or twice a month he walks all 141 floors to build tenant relationships and to be proactive rather than reactive when there’s a problem.

“I’ve been here eight years and have a great staff with an inordinate amount of management for four buildings, including an operations manager, full admin, two supervisors, and eight foremen,” said Sivori. “We have close to 400 different tenants, most of which are high end lawyers, investment bankers, insurance, and high-tech companies. Tenants trust when we say we’re going to do something, it gets done.”

Sivori is a rarity in the cleaning industry, or any industry for that matter. He goes beyond the pale to do everything he can possibly do for his client and tenants, from continuously bringing in new innovations to acting as Able’s company trainer. He even produces road shows demonstrating the best products so other Able operations managers can benefit from his discoveries.

Sivori said, “If I see something that works better and saves labor, I’m going to use it. I even create PowerPoint slide presentations to show ‘This is what we’re going to do to keep our people safe, reduce labor, and clean your property better than anybody else.’”

Paul Giamona, Waxie Sanitary Supply Account Consultant, is another such rare individual. Giamona knew his Able Services customer was always looking for the latest and greatest. So, when he came across a new cordless electrostatic disinfection and sanitization system called EvaClean and realized how important this could be, he implored Sivori to consider it before finalizing his decision to purchase a new solution.

“Bill was one of my first customers when I joined Waxie five years ago. There are very few people who really know everything about the industry and Bill is one of them,” said Giamona. “I was originally showing another electrostatic disinfection system when I heard about EvaClean. I knew this was the right solution for my customers.”

Coincidentally, Waxie Southern California was already testing EvaClean. Since Giamona had generated so much interest from customers in Northern California, Waxie rolled the system out state-wide.

The first thing that piqued Giamona’s interest in EvaClean was that it was cordless, versus the other corded cart unit with bottles of chemical, which is bulky and difficult to transport from place to place. He liked EvaClean’s Protexus electrostatic delivery system, portable handheld and backpack sprayers, and battery life. The PurTabs effervescent tablet form was an even bigger draw. The corded system used gallons, requiring much more labor and storage space, whereas the tablets were compact, easy to carry, and dissolve without ever having to return to the janitor’s closet during a job. With the touchless system, they could simply spray, let it dwell, and dry. But the real clincher was the safer chemistry.

“Once I started peeling back all the info on the chemical, it became a no brainer,” said Giamona. “PurTabs is like a gobstopper. Every time I turn around, I’m getting another flavor of goodness. A single tablet has multiple uses at different dilutions. It’s a multi-surface disinfectant, a food safe sanitizer, an odor neutralizer, and works for almost any vertical application. You can’t find any chemical that does some, let alone all of these. PurTabs is even a water purifier. How much safer of a disinfection process can you have if it can also be used to purify water? How often do you get to be at the cusp of something new and revolutionary?”

Sivori did his due diligence when searching for a new disinfection solution and was about to pull the trigger on a very expensive system when he learned of EvaClean from his Waxie representative. He was also hooked by the cordless Protexus handheld and backpack sprayers, but cost and labor savings, which is the most expensive commodity in the cleaning business, also entered into the mix.

“We used to do the same thing as everybody else,” said Sivori. “When people got sick, we brought in extra staff to disinfect entire office suites in one night, resulting in astronomical labor charges. Then everything changed when Paul introduced us to EvaClean. Now instead of four to five people taking 30 to 37 hours per suite, one person with an EvaClean Protexus backpack sprayer can disinfect a 25000-square-foot floor plate in about two and a half hours. We can spray an office in 12 to 15 seconds, cubicle areas even quicker. I’ve been able to drop my prices dramatically, so Paul has made me look like a hero.”

Though Sivori was initially sold by the ease and speed of the EvaClean electrostatic disinfection system, he was also impressed by the efficacy and efficiency of PurTabs.

“I read all the chemical reports and it’s got a good kill claim. I can sanitize with one tablet or disinfect with two. It’s a deep disinfection that you cannot get from wiping things down,” said Sivori. “Not only is the cost reasonable, but the amount of product used compared to the other system is night and day. A 12″ x 8″ x 6″ case of PurTabs holds 512 tablets and the product goes a lot further. The other system requires about 144 gallons to do the same thing. It’s a huge difference.”

In addition to taking care of tenant offices, Sivori’s team also handles kitchen and private restroom detailing, as well as cleaning about 15 tenant specific gyms and locker rooms throughout the four buildings. Though ready for anything, illnesses and outbreaks aren’t Able’s only concern. Many of Sivori’s tenants are germaphobes who request cleanings and disinfection services on a recurring basis. Though Able Services San Francisco has only been using EvaClean for a little over a year and the electrostatic disinfection system hasn’t been implemented building-wide yet, it has already paid for itself in recurrent services. For those tenants who might question how it’s possible to disinfect so fast and without leaving a lingering smell or residue, Able films each application process to ease their minds—another point of difference for team Sivori.

Meanwhile, Giamona has now successfully implemented EvaClean’s electrostatic disinfection system in almost every vertical, from health care and ambulances to retail and animal care. A Bay area pro baseball team now uses it in the players’ locker room. Giamona even uses it in his own home. However, the education vertical is one of his top priorities.

“Every school should use it every day. I can take the same handheld, use the NSF Registered Food Contact Surface Safe Sanitizer dilution for a whole preschool—toys, mats, everything.” said Giamona. “One evening I got an emergency call from a local K-12 school district when they had an outbreak asking, ‘Does this really work?’ I said ‘Yes, it really works.’ They were able to curtail the outbreak in one evening, a fraction of the time it normally took to achieve readings so kids could go back to school.”

It’s hard to find innovations in the cleaning industry that work, fill a need, and are affordable. EvaClean appears to check every box. Able Services and Waxie agree—The EvaClean electrostatic disinfection system is the future. Sivori and Giamona both expressed the same sentiment in two separate interviews, “This is what everyone is going to be doing in five years. It is going to be the norm.”