One of the tallest buildings on the Vanderbilt University campus in Nashville, TN, Carmichael West Tower 3 residence hall was recently demolished to make way for the second of three new collegiate residences in the West End Neighborhood of Vanderbilt. 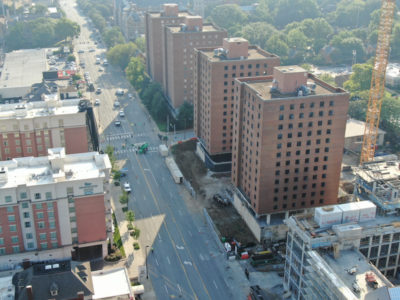 The controlled implosion of the 14-story Tower was approximately an 11-second process overseen by Layton Construction, LLC, acting Construction Manager of Vanderbilt’s West End Neighborhood and Residential Colleges, and Controlled Demolition, Inc. (CDI). The implosion was triggered by a series of dynamite explosives placed into the structural elements of the building, creating the strategic “fall” of the tower. 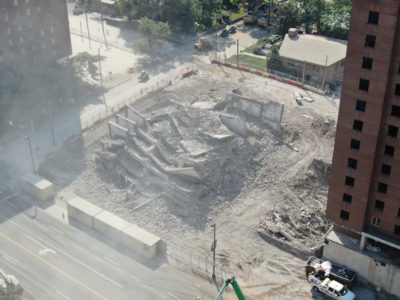 “The execution of today’s implosion was successful due to a great partnership with Vanderbilt University and CDI,” said Senior Vice President of Tennessee Operations Randy Patterson. “Our greatest challenge today was ensuring the implosion stayed confined to a very tight site, as this building was on the corner of Vanderbilt University’s residence hall area, close to other halls, the Greek housing, as well as West End Avenue, a major thoroughfare connecting the Vanderbilt area to downtown Nashville. Safety will always be our greatest priority.” 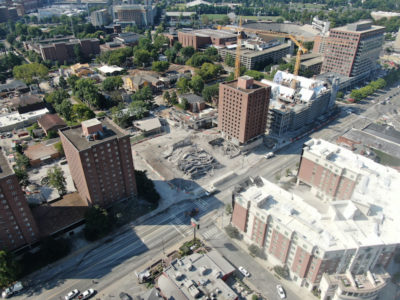 Patterson said the key to success was teamwork in building preparation: “There was an immense amount of work and coordination performed by multiple parties to ensure that this critical implosion date was met on schedule.”

Carmichael Towers 3 and 4 have been home to tens of thousands of students since their opening in 1970. Named in memory of the university’s third Chancellor, Oliver Cromwell Carmichael, the residence halls served undergraduate students.

Prior to the July 27 implosion, Carmichael Tower 4 served as the site for a unique training exercise for more than 800 Nashville firefighters. The Carmichael Towers 1 & 2 on West End Avenue will remain open to residents through the 2019-20 academic year.