With the intent to deliver a multi-use environment that could serve both the public and the local architecture and design community while showcasing the latest in innovative interior products and materials, AIA Dallas commissioned Omniplan to redesign the approximately 26,000-square-foot, two-story space.

“The client wanted a space that was extremely flexible,” said Connor Peirce, Senior Associate at Omniplan in Dallas. “It was our task to rethink the layout of the space to make it open, inviting, and to allow for flexibility of use.”

It was important for the team to fully understand the intent of each area, especially with the quick buildout timeline of less than a year. The first floor is for public-facing programs, including a Design Learning Lab for hosting school groups, workshops, meetings or other private and public events. The entry way also includes a reception area which houses the Downtown Dallas Inc.’s neighborhood center.

The second floor is designed for the new AIA Dallas headquarters consisting of administrative offices, a membership lounge, and conference rooms. In understanding the requirements, the exploration of manufacturers that could support lighting product needs and meet the tight timelines led to working with Chicago-based Focal Point.

Constraints Of An Existing Space

Working within the parameters of the existing space was a challenge, especially with limitations which included an odd-shaped layout, large amounts of glass, and low ceilings. Taking these elements into consideration, Omniplan was tasked with creating a space that felt cohesive and could be used as one large space or multiple smaller areas.

Ultimately, Omniplan settled on using the ceiling plane as the vehicle to bring continuity to the entire space. To do so, the existing low ceiling was removed, exposing the open ceiling structure. By removing the unforgiving ceiling tiles, Omniplan was able to answer the need for a more open environment. However, this also caused acoustical issues.

“With so much steel and glass, we had to be creative in addressing how we could acoustically isolate these spaces,” said Peirce. “We knew we needed an acoustic solution. The question we had to ask was, how can we do it in a way that this could be replicated in many different spaces? It would help define the ceiling plane and would provide organization to each space individually, but also deliver continuity,” said Peirce.

To mitigate reverberation issues and address the lighting needs in the first-floor training room and event space, Omniplan selected Focal Point’s Seem 1 Acoustic luminaire and baffle system with the assistance of Hossley Lighting Associates. The system was newly released to the market and is specifically designed to improve human comfort and resolve noise issues while providing the required illumination levels in commercial environments.

“Using Seem 1 Acoustic was a way for us to showcase products that were emerging in the market and were relevant to what we needed. It also helped us achieve the cleanliness of having one system to answer both lighting and acoustics,” explained Peirce.

Determining the details of the flexible system required close collaboration with Hossley Lighting Associates and Focal Point’s Acoustic Solutions team, who provided design and layout assistance. Additionally, an acoustic analysis of the entire space yielded a .85 second reverberation time (RT) in the training room and a 1.05 seconds RT in the event space area. Using this information, it was determined that 40 continuous runs of 12″ tall Seem 1 Acoustic luminaires – with direct illumination and unlit acoustic baffles with one foot on-center spacing – would be used across both spaces.

Using Seem 1 Acoustic across the two rooms and incorporating a moveable partition permitted Omniplan to create a unified space for large events and smaller individual areas for focused work. “The fixtures in both spaces rendered a coherent solution while creating intimacy because it is the defining factor of the ceiling plan,” stated Peirce.

Peirce said the flexibility of the system was a driving factor for Omniplan to select Focal Point’s luminaire and baffle system, which is available in individual lengths and continuous runs with nominal housing heights of 8″, 12″, and 16″. Ultimately, the flexibility of the system contributed to an approximately 30% reduction in reverberation time in both the event space and training room, which is a noticeable audible reduction in echoing.

The Seem 1 Acoustic luminaire and baffle system was also selected for the second-floor multi-use conference room, which is framed by glass walls on three sides. Due to the abundance of hard surfaces, rows of 12″ tall illuminated and non-illuminated Seem 1 Acoustic with one foot on-center spacing were installed.

Rather than using a standard linear layout, Omniplan created a unique design. The baffles on the left- and right-hand sides of the room were lowered compared to those in the center of the room to create a coffered ceiling effect. The dynamic design elevated the aesthetic, producing a statement piece while reducing noise levels. To achieve the optimal acoustic comfort, other acoustic treatments were also used in the space, such as wall panels and carpet.

Further explaining the reasoning behind the selection of an integrated luminaire and baffle system, Peirce said: “We were working with odd-shaped spaces and needed to fine-tune the lengths. Seem 1 Acoustic was able to provide that. I don’t think we would have been able to find another system that could do that in such a clean way. The Seem 1 Acoustic luminaire and baffle system had the linearity that we were looking for in terms of the orientation of the space, and it also addressed our acoustic concerns as a way to inform the movement throughout the space.”

He also voiced the design team’s concern that selecting lighting and acoustic options from multiple manufacturers may have made the space feel disjointed.

“Due to the tolerance that we were demanding, it was key to having one manufacturer. If we didn’t have that, I believe it would not have played out well for us. Rather than having an acoustic solution and a lighting solution, it was the marriage of both that just looked great. And it was reassuring to know it was all coming from the same place. That is also a benefit of the Seem 1 Acoustic system.”

Peirce summarized the project and the use of Seem 1 Acoustic by saying: “This is the way the market is moving; it’s a design aesthetic people are looking for. It was a no-brainer for us to go that route, and it also helped us achieve the cleanliness of having one system solve both lighting and acoustical needs.”

Despite the unique constraints posed by transforming this irregular space, Omniplan was able to successfully deliver a functional, versatile environment that displayed the latest innovative products and materials. It provides the local architecture and design community with a central location for meetings and collaboration sessions, and a hub to draw inspiration from for future projects.

Peirce said it also is making an impact in terms of its aesthetic quality, and that the client and users have expressed their appreciation of the conference room and lecture spaces. As a member of a few AIA committees, he also has the privilege of experiencing the space first-hand and receiving feedback from other specifiers using the space.

During his visits to the AD EX, Peirce has received inquiries about the Seem 1 Acoustic system from architecture and design community members. AIA St. Louis has also decided to install the Seem 1 Acoustic luminaire and baffle system into its new office, which is expected to be completed later this year.

As the Communications and Government Relations Director for AIA Dallas, Katie Hitt uses the second-floor conference room regularly. Commenting on the completed space, she remarked, “There have been several compliments of the baffles in the boardroom. I’ve worked with several of the design-focused committees and the baffles seem to be a favorite feature of the space.” 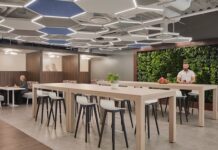 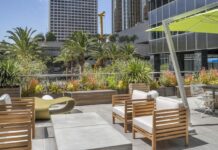 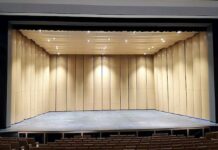