Home » Speak Up With Audio; Deter Incidents At Your Facility 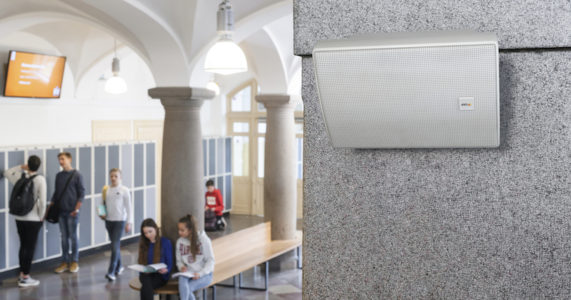 Network audio is an invaluable tool for security solutions; it can be used both with pre-recorded messages triggered by analytics in a camera or with live messaging to a monitored scene. Deterring incidents and theft not only creates a safer environment, it can also provide a lot of savings. These additional benefits include reducing damages and loss of goods, cutting back on the administration associated with incidents, reducing insurance premiums and lowering legal costs.

Here are just a few incidents where network audio has been used to help with deterring incidents at the forefront.

Deter Intruders At A Car Dealership

A major auto dealer made good use of existing speakers at its several locations to deter intruders after hours and protect vehicles that are stored outside and exposed to theft and vandalism.

The solution: Add horn speakers together with motion detection analytics in their cameras. If an intrusion happens outside of the dealership’s operating hours, an audio clip is deployed saying, “You are under video surveillance, please leave our premises.” If the offender fails to leave the scene, another announcement speaks directly to the site from the company’s monitoring station.

Thanks to the combination of video, triggered with an audio warning, and remote access to the speakers, this dealer has managed to deter approximately 90 percent of intruders without having to dispatch law enforcement.

Keeping cellblocks secure is critical to maintaining overall prison safety. In the Massachusetts town of Billerica, the police department is leaning on Axis video cameras embedded with Sound Intelligence’s Aggression Detection analytics to listen for hostile sound waves such as a person yelling. If the system detects fear, anger, duress or verbal aggression, it sends a signal to AXIS Camera Station located in the police dispatch center and to the phone of the on-duty officer. The camera not only shows the cellblock where the incident is happening, it streams a live video of the area. This kind of proactive surveillance helps officers respond to incidents quickly before damage can take place.

What the department really appreciates about IP technology is its scalability.

“Incorporating Sound Intelligence into an existing solution is very cost-effective,” said Greg Katz, Lieutenant and Accreditation & Technology Manager with the Billerica Police Department. “The great part about all the IP technology is that it’s not hard to integrate with many different things.”

The department’s next step is to install an AXIS C2005 Network Speaker in its dispatch center. When the analytics detect aggressive sound patterns, it’ll trigger an audio alert, such as, “Disturbance in cellblock two. Please check.”

From expensive beauty products to prescription drugs, there are many items on the shelves of pharmacies that can attract thieves.

A large pharmacy chain in Europe addressed the issue of theft with horn speakers on the exterior of their buildings. The speakers are used in conjunction with cameras for perimeter defense. When a potential threat is detected after hours, the alarms are transmitted back to a central control room. Once alerted, the operators then assess the threat level and respond where necessary.

When employees are present on-site and feel threatened, they can contact the same central control room using a panic button connected to an audio bridge. This allows them to talk directly to an operator and receive immediate assistance.

ATM attacks are problematic globally with the average number of attacks rising each year. How do you protect yourself from “‘shouldering” and other events where criminals have insight into your personal information?

A bank that operates over 1000 ATMs was seeking an effective method to deter shouldering, a practice where someone looks over the shoulder of the person accessing their account to see their PIN code.

The solution was to install cameras equipped with video motion detection software to detect when someone was standing too close to the customer using the ATM. The analytic would trigger an audio clip to the speaker which would deploy the message, “Please keep your distance from the line.” In addition, the camera would record the event and send a notification to the bank’s control room. If the person did not adhere to the played message, the control room could access a live mic to convey their message in real time. Since the solution was installed, crime has decreased by roughly 30 percent. 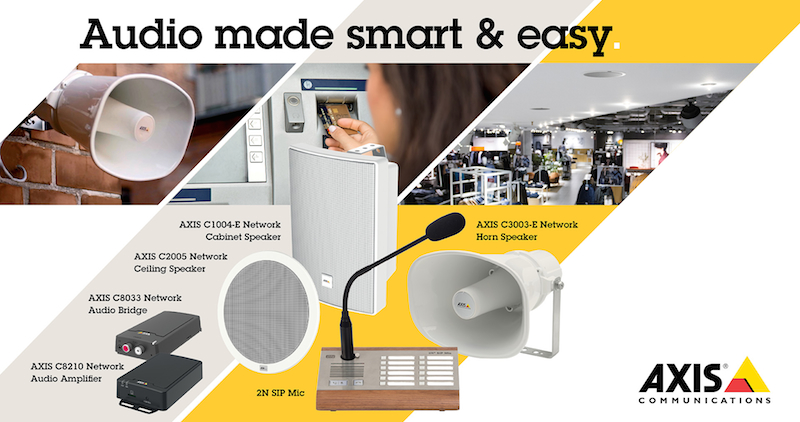 Enhance Your Security With Audio

Network audio is a growing area, and through the above examples you can probably see why. With new developments in technology, facilities today—more than ever before—can utilize audio to proactively respond to incidents and deter criminals. After all, stopping unwanted activity in its tracks is difficult to do when you’re relying on passive surveillance—systems that only tell you what happened after the incident has occurred. With network audio, it’s possible to re-imagine security and go beyond conventions to discover a whole new world of possibilities.

Energy Management & Lighting December 3, 2021
The future of energy among commercial buildings is one where these are optimized individually and networked together, and to the grid,

Building Envelope & Exteriors December 2, 2021
New report looks at the potential for this technology to be used for building façade inspections. Currently, legal drone use in New York City is restricted to approved government agencies in response to specific emergencies.

eBook: Why Mobile Access Control Is The Essential Property Upgrade

Access Control & EAC December 2, 2021
Learn how to improve the life of your tenants and yourself by investing in a cloud-based, mobile access control system.

Energy Management & Lighting December 3, 2021
The future of energy among commercial buildings is one where these are optimized individually and networked together, and to the grid,

Building Envelope & Exteriors December 2, 2021
New report looks at the potential for this technology to be used for building façade inspections. Currently, legal drone use in New York City is restricted to approved government agencies in response to specific emergencies.

eBook: Why Mobile Access Control Is The Essential Property Upgrade