Home » Topics » Technology » Shining A Light On Li-Fi: Could It Work In The Data Center?

Given the amount of data handled within the walls of the average data center facility, it’s not a surprise that many in the industry can get a bit obsessed with the subject of data — how much is being generated, how it’s transmitted, how secure it is, etc. Anytime there is innovation that has the potential to change the way the world consumes data, data center vendors, partners, and customers must take note and determine its ultimate impact on the industry — positive or negative. Such is the case with 5G wireless, high-fiber count undersea systems or any next-generation technology that’s designed to handle the unceasing flow of data in today’s world.

Upon that innovation stage steps Li-Fi — and it has a chance to be the next step in the natural evolution of wireless internet technology — at least indoors.

Li-Fi stands for light fidelity, and it uses light-emitting diodes (LEDs) to transmit data. We’re familiar with LED bulbs from… well… everything. Li-Fi bulbs are equipped with a chip that modulates the light imperceptibly for optical data transmission to be received by special photoreceptors. Similar in nature to the light technology used in a TV remote, Li-Fi can send data embedded in its beam at rapid speeds to the receivers. The beam dims and flickers rapidly, and imperceptibly, and converts into an electric signal once received. That signal is converted back into a recognizable binary data stream like an image file, MP3, or video.

The current standard for wireless data transmission in most homes and enterprises is, of course, WiFi — which uses radio frequency to transmit data from an access point (like a router) and the signal spreads out in a radius around that point. There is no question that WiFi has become so ubiquitous that it will be some time before we’re all replacing routers for LEDs. But it’s also clear that Li-Fi has advantages that make it measurably stronger and faster than WiFi, making it well worth exploring.

Why? Again, look at all of that data. The amount of data transmitted globally is doubling (at least) every year, requiring faster transfer rates. Handling larger and larger data sets is an issue for two reasons: limitations of bandwidth capacity and latency issues. Most ISPs market the idea of speeding up long distance file transfers with the purchase of more bandwidth, but with protocols that are built on TCP (including FTP and HTTP), the bigger problem is definitely latency. Because of latency, file transfers over long distances using TCP-based protocols can only utilize a limited amount of bandwidth. Thus, increasing bandwidth does not speed up transmissions by any effective margin.

Truly speeding transmissions will require more capacity and efficiency than what WiFi is capable of handling. Early testing of Li-Fi in lab-based settings have resulted in speeds of as much as 224 gbps — up to 100 times faster than the connections we use today. Additionally, visible light is much less susceptible to interference than WiFi’s radio waves, and Li-Fi signals cannot penetrate walls. Therefore, Li-Fi should make data transmission a more secure and efficient process, provided that the wireless device and its photoreceptor are in the line of sight of a Li-Fi bulb. Li-Fi doesn’t replace WiFi from the facility out — but it can offer much greater density within a facility.

Li-Fi In The Data Center

Li-Fi technology would not likely be the “go-to” choice for most production environments but it can easily address many of the high-capacity data transfer needs for non-production environments. Data centers are one of a few types of facilities that frequently keep its lights on 24/7 for specific environments. With Li-Fi in a data center, techs and other engineers can securely and efficiently access even the heaviest files from virtually any wireless device, right on the data center floor.

Boutique Security. Since Li-Fi is only accessible within the line of a photoreceptor, it is possible to create “paths” or zones where only specific devices could be utilized. This would enable organizations to control what systems have access within every section of the data center. One example would be granting a vendor access to only those receptors relevant to their “path” through the data center. As the device moves throughout the data center, it leaves a timestamp of the user location, benefiting access control, security, and safety.

Backup. Li-Fi could be a great alternative by adding high speed redundancy within any environment. Organizations add multiple NICS and/or HBAs — why not photoreceptors? No additional cable management is needed; no need to climb through ladder racking to make move/add/changes. Plus, usage can be situational, meaning not every system would need wireless redundancy, but those that can benefit would get great wireless performance and enhanced protection.

Out of Band (OOB). Li-Fi could be an excellent choice for secure out of band networks in the data center. Production would stay on wired infrastructure but networks — backup, exchange, management, etc. — could all move to Li-Fi. OOB isn’t usually bandwidth-intensive but needs to be off of production, easily changeable, and secure. Li-Fi fits that.

Like most innovations that are in their nascent stages, there are some kinks to be worked out before Li-Fi is accepted as a viable replacement for WiFi. For instance, Li-Fi cannot be used in direct sunlight as the photoreceptors on a device aren’t able to detect modulating light waves. Li-Fi will work from reflected light, but in everyday life, the world is full of material which will absorb light, so the received reflected signal is very low. (This is one of the features which make LiFi very secure, so the ‘problem’ is also a desirable feature.) Tests have shown that some amount of ambient lighting will still enable Li-Fi to operate and some vendors are marketing Li-Fi products that are said to work even in bright sunshine. Regardless, advancements must be made before Li-Fi can be considered an outdoor tool under all weather conditions.

As stated above, Li-Fi requires that devices and their photoreceptors be within the line-of-sight of an equipped LED bulb. Once again, while this certainly provides an added layer of security, it can be an issue for many users if they want to move from room to room but haven’t installed Li-Fi bulbs in all of those spaces. Therefore, for Li-Fi to work, it’s going to require a significant reinvestment in lighting and wiring infrastructure in both facilities and homes.

Currently the range of Li-Fi is a few meters, so line-of-sight is not that difficult to achieve. However, there will be obvious situations where Li-Fi will not work, particularly with mobile devices, such as when the user puts a phone in their pocket or bag. 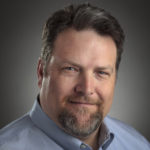 McCall is vice president of innovation for QTS Data Centers, one of largest and fastest growing data center service providers in the United States. In his role at QTS, McCall is responsible for building teams, setting strategic goals, and serving as an evangelist for the company. He has more than 14 years of solutions engineering experience in the data center, telecommunications, and internet technology industries and has held multiple roles at QTS, including director of solutions engineering and director of training.