New data suggests that tech-savvy consumers inside the workplace, not corporate IT managers, hold the keys to accelerating enterprise adoption of major technologies like augmented reality and virtual reality (AR/VR). This shift reflects how influential workers have become in defining their workplace technology preferences and is reversing the trend of businesses adopting major technologies before consumers. 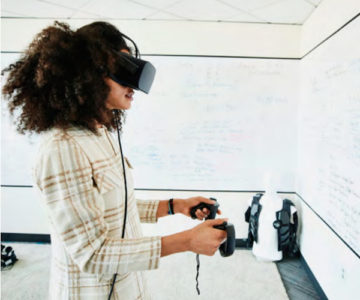 The data comes from a new report by Mojo Vision that explores employee attitudes toward next-generation workplace technologies. According to the report, workers anticipate using emerging technologies like AR/VR to help them solve everyday challenges on the job, adhere to required procedures, and provide unprecedented access to information. But, for the technology to be widely adopted, workers say issues like user comfort, privacy, and device distraction will need to be addressed.

Based on industry data on company spending, enterprises are indicating that AR/VR adoption in the workplace is not a matter of if, but when. IDC predicts that commercial sectors will account for 80 percent of worldwide spending on AR/VR products and services by 2022.¹ Yet, the use of this kind of technology is far from ubiquitous in the workplace.

In fact, while approximately 75 percent of workers have never used AR/VR headsets or similar devices on the job, the vast majority (78%) say they are open to using the emerging technology if asked by their employers, according to the Mojo Vision report. The report also found that over half of workers (55%) believe that AR/VR headsets or similar devices will be as common as smartphones in the workplace within the next decade.

The new report, Tomorrow’s Workplace Technology: What Happens When Things Get Personal, is based on a survey of over 1,000 US workers conducted by Mojo Vision. The survey explored how current workers feel about using advanced technology tools for work, how it will help them improve their own on-the-job skills and goals, and the critical factors driving adoption. Because if employee expectations aren’t met — if workers can’t clearly see the benefits of the tools they’re provided — enterprise investments are at risk.

Overall, the data reveals employees are optimistic about the impact of technology on their everyday jobs today and in the future:

Respondents also see workplace technology changing dramatically in the next decade, with 42 percent saying they think screens will be replaced by new displays, such as smart glasses, contact lenses, headsets, etc. Despite this optimism, workers believe that many changes and improvements to existing AR/VR form factors will be necessary to ensure successful adoption and deployment.

While AR/VR technology can help workers gain immediate access to information, learn new skills, or adhere to processes — more than half of workers (58%) are concerned about their privacy when using the technology. Another 49 percent said that comfort would be an issue if they had to wear headsets for extended periods of time, and they would feel awkward using these devices around coworkers.

“It’s clear from the data that today’s workers are increasingly accustomed to the latest technology and have higher expectations for usability and benefits. And because employees are more vocal about these expectations, they now strongly influence IT decisions to deploy new technologies sooner,” said Steve Sinclair, senior vice president of Product and Marketing at Mojo Vision. “If next-generation workplace technologies, including AR/VR devices, are not designed and built with worker preferences in mind, workers may very well resist, and enterprise adoption could face delays or obstacles.”

The survey also explored the idea of Invisible Computing. Respondents were asked to consider a future in which workplace technology becomes so small or discreet that it is practically invisible. This technology could allow workers to focus on the tasks or the people in front of them, and not on their interaction with screens.

Sixty-one percent of workers said less visible workplace tools would help them immediately recall critical information required to complete a task or process, and 56 percent said it would help keep important information on hand for meetings or presentations. Another 47 percent saw the benefit of Invisible Computing in providing them better face-to-face connections with customers or clients.

“In the past 25 years, workplace technology has gotten smaller, more powerful, and more personal — we can now take our work everywhere with us. Unfortunately, the technology of today can be very distracting,” continued Sinclair. “If the future unfolds in the way that workers predict it will, technologies like AR/VR will enable workers to have access to information immediately without the visible interruption of a device. This is the promise of Invisible Computing and a driving force at Mojo Vision: the ability to do more with less and focus on the task at hand and the people in front of you.”

Want to learn more about technology and facility management topics?

Looking for updates? Check out all the latest facility management news related to Technology.