Known for award-winning museum designs and architecture, urbanism, campus planning, and environmental design work, the firm Studio Ma has announced the completion of three major museums and a national initiative to promote and design “a new generation of net zero energy museums” and cultural institutions worldwide.

“Today we have the know-how and technology to create museums that make more energy than they use, that recycle rainwater, and eliminate carbon emissions—even generating resources for their communities,” says Christiana Moss, founding principal and a juror for the American Institute of Architects’ prestigious COTE awards for environmental architecture.

Eyeing new opportunities to build “the world’s first regenerative, bioclimatic museum,” the firm has recently completed three major museum projects noted for their city-making designs and shown to be highly energy efficient, healthy, and eco-conscious. Examples include Scottsdale’s Museum of the West, a noted expansion of the Heard Museum, the Native American Cultural Center in Flagstaff, AZ, and an addition to the Phoenix Art Museum.

Inspired by Western icons and full of daylight, Scottsdale’s Museum of the West stands as a cost-conscious, modern landmark with very low carbon emissions and minimal energy and water use, outperforming every building of its type in the desert region. “This bioclimatic solution points to new directions for cultural buildings, which are thought to always demand very high energy use intensities due to specialized lighting, security, and rigorous air controls,” says architect Christopher Alt, a founding principal.

An in-depth case study of Scottsdale’s Museum of the West will be published in an upcoming book titled Contemporary Museum Architecture and Design, due for release in February 2020, in which a chapter written by firm leaders Moss and Alt will discuss their “triple bottom line” approach to museum design. That is, a three-point commitment to ensure financial stability and sustainable building practices in a way that simultaneously enhances the community space.

The Museum of the West and other works by Studio Ma highlight their cutting-edge design approach—including the firm’s own just-opened headquarters in Phoenix, a repurposed building that will operate a pioneering blackwater recycling plant installed under its small parking lot. Studio Ma’s direction toward “regenerative, bioclimatic architecture”—that responds to natural settings and climate to not only save carbon emissions and cut use but also produce resources including energy, water and more—is being well received nationally.

As a next step, in 2020 Studio Ma will debut a new white paper and exhibition on regenerative architecture and building systems, in conjunction with a major university and cultural organization. Called “Building the Biome,” the design exhibition and functional model will require zero energy as it scrubs carbon, purifies water, cleans the air, and even creates food while displaying a beautiful array of plant life within a modern, glass-enclosed “living machine.”

“In the future, not only every museum and cultural center, but even our homes and workplaces, will all contain an attractive and functioning living machine to regenerate many of the resources we and our buildings need,” says Moss, who adds that the firm will announce their exhibition location and partners in early 2020.

In addition to being named to the national COTE jury, recent recognition for the firm’s successful work include the American Institute of Architects (AIA) Arizona’s highest honors, the Firm of the Year Award, and inclusion in Architectural Record’s exclusive Design Vanguard. The flurry of new commissions includes a master-planning study at Washington University, St. Louis, a student center and residential hall for Arizona State University, various mixed-use and multifamily projects, and a graduate student housing complex at Princeton University, among others.

Want to learn more about Energy and Lighting topics?
Check out all the latest facility management news related to Energy Management & Lighting. 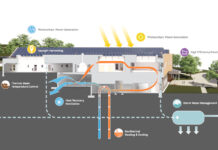 Easing The Pathway Towards A Net-Zero Energy School 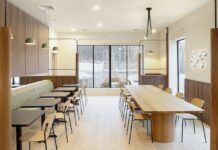