Invented by the Chase brothers, founders of the Necco candy company, candy conversation hearts have been a Valentine’s Day staple for decades. Necco produced more than 8 billion candy hearts each year—adding updated messages such as “Text Me” to the classics like “Be Mine” and “Kiss Me”—until the company’s sudden bankruptcy mid-2018 left Americans with no candy hearts for 2019.

Indeed, Sweethearts were in danger of disappearing forever when the Spangler Candy Company acquired the brand that year. Unfortunately, there wasn’t enough time to produce Sweethearts for Valentine’s Day 2019, and their absence was lamented by fans of the tiny candy hearts.

This year, Spangler was able to return Sweethearts to store shelves in limited quantities after a major effort to relocate and rebuild the production equipment, find the original recipe, and reintroduce classic flavors like wintergreen and banana to the mix. But the journey back included a few bumps in the road, according to the company.

“The old printing equipment was not reliable so Spangler invested in a new printer, but it was accidentally damaged during production. The result was a few more ‘silent’ hearts than usual,” explains the Spangler website.

“Spangler is looking to the future for Sweethearts and is committed to fully returning them to the Valentine season. Plans for fun new sayings and flavors are already in the works!”

A New Twist On An Old Favorite

Meanwhile, MyCustomCandy formulated and shaped its own candy conversation hearts in late 2018 after hearing the news of Necco shutting down. Worried that candy hearts wouldn’t be available again this year, many Americans turned to MyCustomCandy to get their candy heart fix, with the added bonus of being able to design their own hearts with custom sayings.

When given a chance to print whatever they wanted on their candy hearts, this year’s custom sayings varied from sweet and tender to naughty and just plain mean, according to the company. Some romantics chose classic phrases like “love you forever,” while others cussed out exes with phrases like “never again” and “i hate you.”

”Yes, it’s always a little bit surprising that people go that far out of their way to send a solid middle finger to a tainted ex-lover,” commented owner Sarah Hannington.

MyCustomCandy tallied up thousands of orders to see whether people were sweet, naughty, or mean this Valentine’s Day. And while the majority were sweet (62%), almost a third (27%) were naughty, and 11% were just outright mean.

Certain states— we’re looking at you, Arizona, California, and Florida—have a naughty streak. (Must be the heat.) 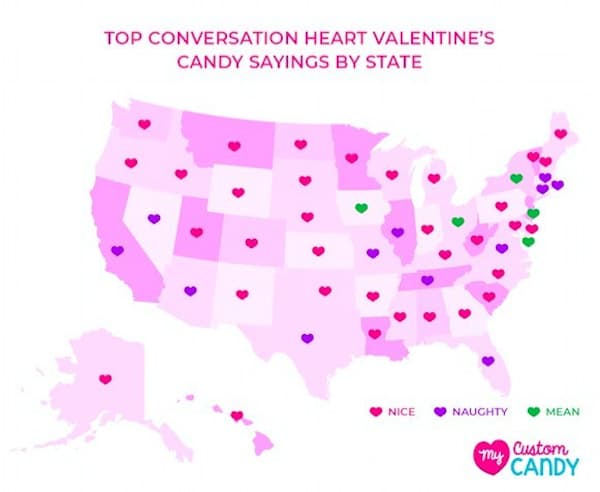