As AI and deep learning technology continues to grow and expand, what had been movie fantasy only a few years ago is today a reality. PlateSmart Technologies has ridden this evolutionary wave, deploying the company’s ever more cutting-edge vehicle recognition solutions to new customers and markets, including the motion picture industry. By heightening vehicle perimeter security at major studios in New York and Georgia, the company’s proactive technology has already prevented theft and intrusion for its clients, dramatically reducing studio liability and increasing ROI. 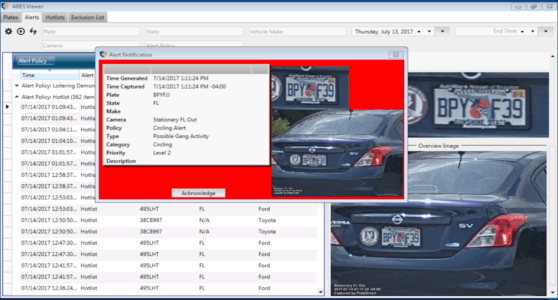 PlateSmart was the first company on the market to offer automatic license plate recognition (ALPR) and video analytics as a software-only, camera-agnostic solution. It recently rolled out a new AI and deep learning-based version of the PlateSmart ARES enterprise software that can identify multiple vehicle attributes, including the plate, its jurisdiction, vehicle make, color, and orientation, to name a few. When a New York City studio that had been using PlateSmart ALPR heard about this evolution to true vehicle DNA, they chose to upgrade.

This client maintains an authorized vehicle list in PlateSmart ARES. When a vehicle on this permission list arrives at one of the studio’s many entrances, the software triggers a gate to open and allows the vehicle onto the property. When it detects an unauthorized vehicle—either one not on the permission list or one on a separate exclusion list—PlateSmart ARES alerts security.

The 24/7 nature of filmmaking also required the studio to ensure that vehicles were on site at the right times. The software’s robust analytics module, PlateSmart ARES Reporter, gives studio security the ability to identify any vehicles within their perimeter at any given time.

The success the studio saw with the PlateSmart system recently led to a similar implementation at a motion picture studio in Georgia.

As a software-only solution, PlateSmart is easy and cost-effective to integrate with a studio’s existing surveillance cameras and security infrastructure, such as a video management system (VMS) or visitor management tool. And when it’s time to upgrade or expand, it’s a software upgrade rather than a hardware replacement.

Studios wanting to tighten security even more can work with local law enforcement via PlateSmart Network. This extension of PlateSmart ARES allows a studio to share every plate read with local cooperating authorities who compare it to their eyes-only hotlists. If they get a hit on a vehicle associated with a wanted individual, law enforcement can be dispatched to the studio before a situation occurs.

“The ROI to a television or movie studio is obvious, both in terms of installation and maintenance as well as reduced liability,” Chigos said. “The sites are more secure than they would be otherwise, and installation, maintenance, and upgrades are simple and cost-effective. It’s the reason we’re in talks right now with other studios on the West Coast about protecting their facilities.”

Construction & Retrofits January 13, 2022
Here is a look at the installation of self-regulating electrical heating cables within conduit embedded in the substructure to prevent this potential threat to cold storage facilities.