At his daily coronavirus briefings, President Trump always mentions the tally of nations that have now been afflicted with this nasty virus, pauses to marvel at the global reach of the COVID-19 pandemic and then adds: 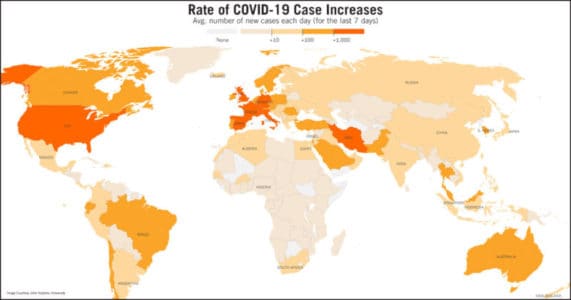 “Nobody saw this coming.”

This is his counterpoint to the conflagration America is now confronting, with a life or death race to triple ICU beds in the exploding hot zones of New York City and Northern NJ. They’re building a field hospital next to MetLife Stadium, where the Giants play.

Doctors and nurses desperately are pleading for thousands of ventilators and protective gear to replace a dwindling supply that is the only thing standing between the 20 million people living in the New York Metropolitan Area and the catastrophic collapse of its hospital system.

In Elmhurst, Queens, not far from where President Trump grew up, they backed a huge refrigeration truck—the kind they use to carry slaughtered beef to markets—up to the loading dock of the borough’s largest hospital. The truck will serve as a temporary morgue, augmenting the hospital’s morgue, which already is filled to capacity.

The rate of what the scientists call the exponential geometric progression of the coronavirus skyrocketed in New Orleans after city officials inexplicably decided to let the good times roll on Bourbon St. on Fat Tuesday, putting NOLA in the same predicament as NYC, but with far fewer resources to deal with it.

“Nobody saw this coming” also seems like an excuse for our stunning failure to use the interregnum before the outbreak—those precious weeks in January, February and earlier this month, when we could indeed see what was coming from China and Italy—to prepare for what was on its way to America.

In fairness to the president, let’s stipulate up front that this was a collective failure which coincided—at least from Jan. 16 to Feb. 5—with our national preoccupation with the impeachment trial of Donald Trump.

We failed to enact a containment strategy, as they have to great success in South Korea and Japan. Both countries deployed aggressive testing immediately at the beginning of the outbreak and used this information for targeted quarantines.

At the same time that we completely dropped the ball on testing and containment, we failed to surge our emergency medical capacity, especially in our most densely populated regions in NY-NJ and on the West Coast…

Read the rest of Jack Rogers’ Editor’s Blog at BusinessFacilities.com.

Want more news about COVID-19 and its impact?