Every day, industrial workers transfer potentially hazardous chemicals — such as solvents, acetones, lubricants, cleansers, and acids — from large drums into smaller containers, or into machinery. Traditionally, such potentially flammable or combustible liquids have been tipped and poured. Today such spill-prone, VOC emitting methods are no longer considered acceptable, safe, or compliant — not when a fire or explosion can result.

In particular, younger workers, having seen the resulting physical injuries, chronic respiratory ailments, and even deaths endured by parents, grandparents, and friends want much safer working conditions. Consequently, there is now a call for greater safety and regulatory oversight to protect vulnerable workers and their families as simply and efficiently as possible.

“It can be catastrophic to a company if toxic or highly flammable material is accidentally released at the point of use,” says Deborah Grubbe, PE, CEng, founder of Operations and Safety Solutions, a consulting firm specializing in industrial safety.

“When tipping a heavy drum, it is extremely difficult to pour a liquid chemical and maintain control,” adds Grubbe. “Companies have to assume that if something can go wrong during chemical transfer, it will, and take appropriate precautions to prevent what could be significant consequences. Because there is no such thing as a small fire in my business.”

Although the dangers of transferring flammable and combustible liquids are very real, protecting workers from harm can be relatively straightforward. This includes proper safety training, the use of personal protective equipment (PPE), and the use of engineering controls to prevent dangerous spills.

During a manufacturing process on November 20, 2017 at Verla International’s cosmetics factory in New Windsor, NY, an employee transferred hexamethyl disiloxane (flash point -6 °C / 21.2 °F) from a drum into another container and then wiped down the chemical drum. The friction from wiping created static electricity that caused the drum to become engulfed in flames within seconds. The resulting fire and explosions injured more than 125 people and killed one employee.

A video released by the Orange County Executive’s Office shows the worker wiping down the chemical tank, “causing static which is an ignition event.”

“Seconds later, the tank becomes engulfed in flames, with parts of the man’s clothing catching on fire as he runs from the explosion,” according to the Poughkeepsie Journal, a local area newspaper.

Although the man sustained only minor injuries, many at the cosmetics factory were not so lucky.

With the potentially lethal consequences from the use of flammable/combustible liquids in so many industrial facilities, it is essential to understand the hazard.

In a flammable liquids fire, it is the vapors from the liquid that ignite, not the liquid. Fires and explosions are caused when the perfect combination of fuel and oxygen come in contact with heat or an ignition source. Based on their flash points, that being the lowest temperature at which liquids can form an ignitable mixture in air, flammable liquids are classified as either combustible or flammable.

Flammable liquids (those liquids with a flash point < 100 deg F) will ignite and burn easily at normal working temperatures where they can easily give off enough vapor to form burnable mixtures with air. As a result, they can be serious sources of a fire hazard. Flammable liquid fires burn very fast and frequently give off a lot of heat and often clouds of thick, black, toxic smoke.

Combustible liquids (those liquids with a flash point > 100 deg F) do not ignite so easily but if raised to temperatures above their flashpoint, they will also release enough vapor to form burnable mixtures with air. Hot combustible liquids can be as serious a fire hazard as flammable liquids.

Both combustible and flammable liquids can easily be ignited by a flame, hot surface, static electricity, or a spark generated by electricity or mechanical work. Highly volatile solvents are even more hazardous because any vapor (VOCs) released can reach ignition sources several feet away. The vapor trail can spread far from the liquid and can settle and collect in low areas like sumps, sewers, pits, trenches and basements. If ventilation is inadequate and the vapor trail contacts an ignition source, the fire produced can flash back (or travel back) to the liquid. Flashback and fire can happen even if the liquid giving off the vapor and the ignition source are hundreds of feet or even several floors apart.

The most obvious harm would be the danger of a fire or explosion.

“If the vapor is ignited, the fire can quickly reach the bulk liquid. A flammable vapor and air mixture with a specific concentration can explode violently,” according to information on the topic posted online by the Division of Research Safety by the University of Illinois at Urbana-Champaign.

Without proper ventilation, the handling of flammable substances has a good chance to create an explosive atmosphere. It is essential to work only in well-ventilated areas or have a local ventilation system that can sufficiently remove any flammable vapors to prevent an explosion risk.

Because two of the three primary elements for a fire or explosion usually exist in the atmosphere inside a vessel containing a flammable liquid (fuel and an oxidant, usually oxygen), it is also critical to eliminate external ignition sources when handling such liquids. Sources of ignition can include static discharge, open flames, frictional heat, radiant heat, lightning, smoking, cutting, welding, and electrical/mechanical sparks.

When transferring flammable liquids from large containers (>4 L), to a smaller container, the flow of the liquid can create static electricity which could result in a spark. Static electricity build-up is possible whether using a pump or simply pouring the liquid. If the bulk container and receiving vessel are both metal, it is important to bond the two by firmly attaching a metal bonding strap or wire to both containers as well as to ground, which can help to safely direct the static charge to ground.

When transferring Class 1, 2, or 3 flammable liquids with a flashpoint below 100°F (37.8°C), OSHA mandates that the containers must be grounded or bonded to prevent electrostatic discharge that could act as an ignition source. NFPA 30 Section 18.4.2.2 also requires a means to prevent static electricity during transfer/dispensing operations.

Beyond PPE and proper ventilation, it is absolutely critical for workers to use regulatory compliant, engineered controls to safely transfer flammable and combustible liquids at the job site. Most states and municipalities across the U.S. have adopted NFPA® 30 Flammable and Combustible Liquids Code and OSHA 29 CFR 1910.106, which address the handling, storage, and use of flammable liquids. With NFPA 30, material is classified as a Class 1 liquid (flammable) and Class 2 and 3 (combustible).

The codes account for safeguards to eliminate spills and leakage of Class 1, 2, and 3 liquids in the workplace. This begins with requirements surrounding the integrity of the container, but also extends to the pumps used to safely dispense flammable and combustible liquids.

Point of Use Containment

According to Gary Marcus of Justrite Manufacturing in an article posted on EHS Today’s web site, “Drums stored vertically are fitted with pumps instead of faucets for dispensing. Use of a pump is generally considered safer and more accurate. Some local codes require pumps for all drums containing flammable liquids.

A fast-growing approach to flammable liquids storage is to keep as much liquid as possible close to the point of use because it is efficient and saves time. Workers can minimize their exposure to potential ignition sources if they replenish their solvent supply from a drum near their workstations, rather than from the solvent room a quarter-mile away. OSHA permits up to 60 gallons of Class I or Class II liquids and up to 120 gallons of Class III liquids to be stored in safety cabinets close to workstations.”

In most workplaces, supervisors and facility managers have been recommending rotary and hand suction pumps to transfer flammable liquids for decades. However, they are increasingly turning to sealed pump systems designed for class 1 and 2 flammable liquids, which are a more effective engineering control tool for protecting employees and operations.

Conventional piston and rotary hand pumps have some inherent vulnerabilities. These pumps are open systems that require one of the bungs holes to be open to the outside atmosphere. The pumps dispense liquids from the containers using suction, so it requires that a bung be open to allow air to enter the containers to replace the liquid removed. Without this opening, either the container will collapse or the liquid will stop coming out.

Typically, there is also a small gap between the container opening (bung) and the pump dip tube that allows air to enter. This opening also allows some vapor release into the atmosphere when the pumps are unused and connected to the container. The gaps may allow an explosion to occur at a temperature near the flashpoint. This can cause a high-velocity flame jet to vent near the bung, which could injure personnel near the container.

In addition, using the piston and rotary pumps to remove liquid from containers can allow some spillage since there is no flow control device. If a seal fails, liquid can also be sprayed from the pump and onto the user and the floor.

As a solution, the industry has developed sealed pump dispensing systems that enhances safety by eliminating spills and enables spill-free, environmentally safe transfer that prevent vapors from escaping the container.

These systems are made of groundable plastic and come complete with bonding and grounding wires. The spring actuation tap handle can be immediately closed to stop liquid flowing preventing any spills. The design of this sealed pump system also prevents liquid vapors from exiting the container when the pump is unused. These characteristics significantly reduce the chance of an ignition event. The combination of all these features ensure the pump meets both NFPA30-2015.18.4.4 standards and NFPA 77.

Now that the hazards of transferring flammable and combustible liquids are clearly recognized, proactive industrial facilities are beginning to protect their workers and their families by implementing safety training, PPE use, and sealed, grounded pumps. This will help their operations stay compliant, mitigate insurance risks while minimizing the risk of fire and explosion due to spills, vapors, and static shock. 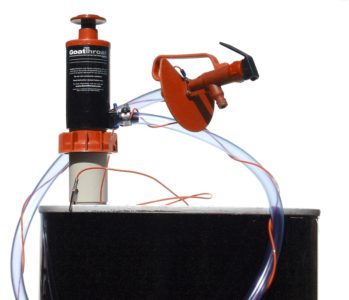 Nancy Westcott is the President of GoatThroat Pumps, a Milford, CT-based manufacturer of industrial safety pumps and engineered chemical transfer solutions that keep companies in regulatory compliance. The company has developed a sealed, hand-operated or pneumatic-operated pump system, the SCP Pump Series, that complies with NFPA30.18.4.4. so it can be used to safely dispense flammable and combustible liquids. The industrial, pail and drum pumps dispense liquids from containers up to 55 gallons in size by developing small pressures (less than 6 psig) on the vapor space over the fluid in the container. Custom configured pumps, fitting and accessories are fluid specific, meet compatibility requirements, and are designed as complete turnkey solutions to fit the users’ exact transfer applications.

Want to read more about facility management and safety?

Check out all the latest facility management news related to health and safety.