Walsh Construction, a Chicago-based general contracting, construction management and design-build firm, has completed the historic rehabilitation of the 104-year-old Cook County Hospital building, converting the building into a dual branded Hyatt Place and Hyatt House hotel. The project is the first phase and anchor for Harrison Square, a new micro-neighborhood that will add residential, office, retail, and hotel space in the area immediately surrounding the former hospital within the Illinois Medical District. The project was directed by the Civic Health Development Group, a joint venture led by Chicago-based Murphy Development Group along with MB Real Estate, Walsh Investors, and The Granite Cos. Inc.

The 345,000-square-foot old Cook County Hospital was decommissioned in 2002 and remained vacant for more than 15 years, disquieting preservationists, historians, and other concerned citizens that the magnificent Beaux Arts building was at risk of demolition. Those fears were relieved when it was officially announced in 2018 that the prominent medical institution would be given life once more.

Architect Skidmore, Owings & Merrill designed the project to incorporate features highlighting the building’s long history as one of the world’s top teaching hospitals and significant place in the history of Chicago as its first public hospital. The building also includes a museum that chronicles the hospital’s noteworthy contributions to the region and to the medical field.

“The old Cook County Hospital is rich in history, having served our community and nation for over a century, while at the same time being a fountain of medical research, innovation, and advancements,” said Dan Walsh, co-chairman of Walsh Construction. “The Walsh Group is proud to have played a leading role in saving and transforming this unique historic structure; and delivering a reborn building that welcomes visitors and economic revival to the Near West Side of Chicago for another 100 years.”

Walsh Construction began renovations at the top floor and proceeded to work down to ground level, crews removed all interior partitions, leaving a clear floor plate nearly 550 feet long and 70 feet wide. Once the floor plate was cleared, new composite decks were installed. The original terrazzo flooring was completely refurbished, and the intricate interior moldings were meticulously repaired to its original condition.

On the exterior of the building, masons labored to preserve, repair, and recreate the historic $18 million façade, requiring more than 4,160 individual pieces of terra cotta to be repaired or duplicated by Gladding, McBean — one of only two terra cotta manufacturers in the United States.

“This project is based upon community revival and opportunity for the local workforce and the Near West Side community,” said Jeff Pezza, vice president at Walsh Construction. “A tremendous amount of gratitude must be given to our dedicated project team, and especially the elected officials, organizations and individuals like Larry Huggins from The Granite Companies who helped champion this project across Chicago.”

“The reborn Cook County Hospital will further energize the Medical District and supplement the neighboring healthcare institutions,” said Tom Caplis, vice president of healthcare at Walsh Construction. “This building has been rejuvenated and will serve as a place of history, comfort and hospitality to all who visit.” 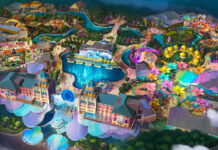