After dropping 24% during the height of the COVID-19 crisis in May, U.S. office building electricity consumption has risen back closer to historical levels and is within about 10% of pre-pandemic levels on average, according to new national data from Hatch Data. 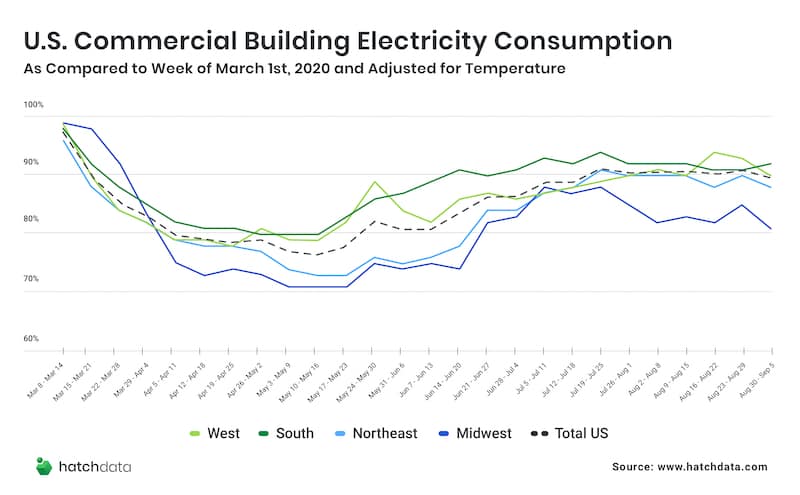 There is some variation across geographic regions of the U.S. in the extent of the energy use decline and increase, and the timing, reflecting when stay-at-home orders were issued in various regions and when they were lifted. 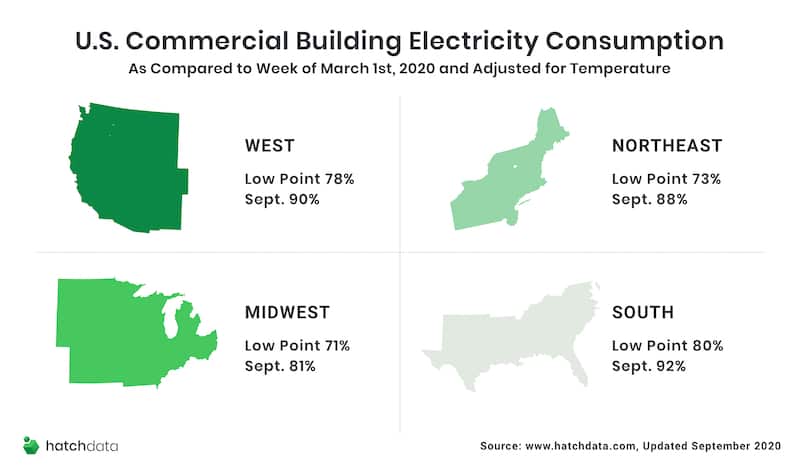 With data and intelligence from building operators that use the company’s software, Hatch Data has insight on two key questions regarding electricity usage during the COVID-19 pandemic and resulting shutdown.

Why didn’t electricity usage decline more than 24% nationally when buildings in most metropolitan areas were virtually unoccupied?

Despite the reduced levels of occupancy during the pandemic, the desired or optimal state is not a mothballed building. Many building systems need to run to prevent degradation, protect occupant health, minimize risk of failure, and ensure they’re ready to ramp up quickly when tenants are able to return to work.

Also, in most cases lease obligations compel landlords and their operating teams to continue to maintain certain temperatures and hours in conditioned spaces. Lease language varies, but it’s common for these obligations to remain — even in a crisis situation — unless tenants explicitly consent to variances. In addition to comfort systems, essential 24/7 loads such as smaller server rooms, telco closets, and emergency lighting remain in most buildings, leading to a persistent level of energy usage.

Hatch Data found that best-in-class buildings were able to able to reduce energy consumption by upwards of 40% or more at the height of the lockdown period. According to the company, this discrepancy (between the national average of 24% and 40%) underscores the sizable opportunity to increase building operational efficiency by seizing the moment to make lasting changes in building operations.

Why has usage climbed to 89% when building occupancy on a national level is hovering only between 25% and 50%?

Preparing for re-occupancy accounts for the increase in energy consumption from the low points seen during the pandemic, including satisfying tenant lease requirements (as noted above) for spaces that already are reoccupied. At the same time, building operators are dealing with heightened health and safety issues, some of which require energy to meet.

For example, ASHRAE has released guidance on preventive measures that operators can execute with respect to heating, cooling and ventilation (HVAC) systems. One suggested strategy is to increase outdoor air ventilation, install higher-rated filters, and increase cleaning protocols. These adjusted operating parameters and inconsistent guidance on regional re-entry have operators and owners in a leading position to demonstrate preparedness in advance of workers returning.

Check out all the latest facility management news related to Energy Management.