The U.S. EPA’s Responsible Appliance Disposal (RAD) Program is excited to announce the recipients of the first annual RAD Leadership Awards Ceremony, which was hosted virtually via webinar as part of the Annual RAD Partner Meeting on October 21, 2020. In total, 13 partners received awards for outstanding program achievements in appliance recycling. The winners are determined based on an evaluation of both quantitative and qualitative metrics. 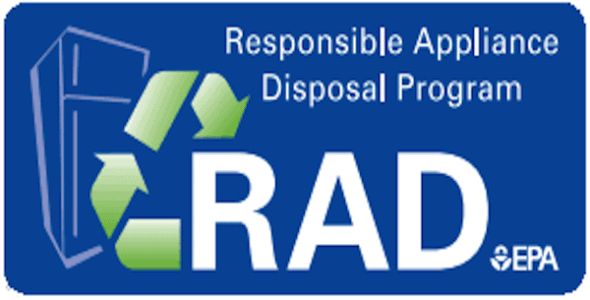 Partners in EPA’s RAD program commit to collecting and disposing of old refrigerated appliances such as refrigerators and freezers, window air conditioners, and dehumidifiers, using best environmental practices. This means that, in addition to complying with laws on the recovery of refrigerant, used oil, mercury, and polychlorinated biphenyls or PCBs, partners also recover appliance foam, promote the recycling of all durable goods, and promote the permanent retirement of old, inefficient appliances to save energy. As a result of their commitments, RAD partners have achieved significant environmental benefits since RAD first launched in 2006, including reducing emissions of ozone-depleting substances by 1,942 tons.

“Our RAD partners have increased appliance recycling by employing best environmental practices, which reduces emissions, saves energy, and builds strong partnerships in our communities,” said Anne Austin, Principal Deputy Assistant Administrator for EPA’s Office of Air and Radiation. “I am always pleased to recognize the positive impact our exceptional partners have on the environment, and I am glad to add these RAD Leadership Award winners to that remarkable group.”

The RAD Ambassador Award recognizes a partner with exemplary practices that reflect the goals of the RAD program. This was presented to Consumers Energy (Jackson, Mich.), who demonstrated exemplary partner practices, including launching an innovative program to optimize their appliance pickup routes for the collection of old refrigerated appliances. In addition, Consumers Energy partnered with the local chapter of Habitat for Humanity to increase awareness of appliance recycling and to raise funding support for Habitat for Humanity.

Learn more about the RAD Program and its new awards here: https://www.epa.gov/rad/rad-leadership-awards.