While only 27% of Americans expressed interest in going to a sporting event in the next six months, the numbers are more promising when looking at the next 12 months, where 58% of Americans are open to attending a sporting event in that time, according to a recent survey by Tappit. The survey measured American sports fans’ comfort levels in returning to live games, how they have kept engaged with their favorite leagues and teams during COVID-19, and the precautions stadiums must put in place to make them feel safe.

In making a decision about whether to attend an event, the majority of respondents (78%) claimed sitting too close to other spectators was a factor impacting their decision, while 52% stated that long lines at concession stands would have an impact on their decision to return, followed by 45% mentioning the reduced atmosphere in the venue. The survey also reflected the physical measures that fans believed were most important to implement, with social distancing throughout the stadium being the major driver. An overwhelming 71% of the respondents said they were in favor of social distancing measures, followed by sanitizing stations (58%), and temperature checks (48%).

Aside from the concerns around capacity and sanitization, ways to reduce lines around concessions and speed up transactions are also welcomed, as the likelihood of transmitting germs and bacteria are significantly amplified in crowded places like long lines. When asked specifically about the introduction of contactless payment solutions to reduce the risks around COVID-19, over half (56%) of American sports fans stated they would feel more comfortable if their team’s stadium implemented contactless payment options. 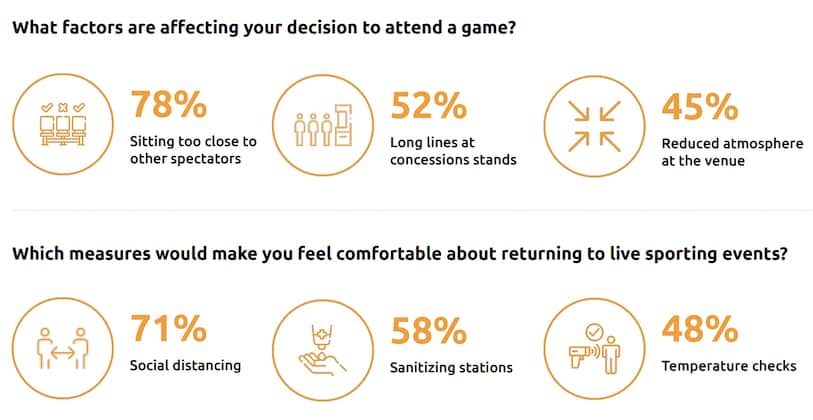 Although only 15% of American sports fans have attended a major league sporting event since the start of the pandemic (mostly due to the majority of leagues shuttering their stadiums to fans), of those who have attended a game to date, 72% felt their team’s venue did a good job of making them feel safe and comfortable.

“Although a large percentage of American sports fans currently feel uncomfortable attending in-person games, there are numerous initiatives that stadiums are implementing that make spectators feel more at ease,” said Jason Thomas, Global CEO of Tappit. “Our data suggests that if all venues address the key concerns around social distancing, long lines and minimizing contact, then fans would be much more willing to attend events. There are a host of measures that can be put in place that will help fans feel safe and return faster, from speeding up transactions using contactless payments through to reducing person-to-person contact and providing sanitizer stations.”

Want more news about COVID-19 and its impact?