By Klaus Reichardt
From the April 2021 Issue

Now that the U.S. may be seeing light at the end of the long COVID-19 tunnel, we are taking stock of what we have learned from this difficult period. One lesson likely to endure is the power of “COVID messaging” to change behavior. This new understanding may serve us well in facility management and, taking this a step further, for water conservation and water reduction strategies.

One of the earliest COVID-related messages came from Tedros Adhanom Ghebreyesus, director of the World Health Organization (WHO). In March 2020, when the pandemic was first confirmed, Ghebreyesus gave the following statement: “I have a message for young people: You are not invincible; this virus could put you in hospital for weeks or even kill you. Even if you don’t get sick, the choices you make about where you go could be the difference between life and death for someone else.”

The power behind this message was that it appealed both to the self-interest of young people (this virus could put you in hospital for weeks, or even kill you), as well as the public good (the choices you make … could be the difference between life and death for someone else).

Historically, it’s been believed the most effective messaging strategies to change human behaviors are those focused on self-interest. “According to classical economic theories of decision-making, people care only for their own welfare,” writes Jillian J. Jordan of the Harvard Business School. “This perspective would suggest that self-interest should be the strongest motivator.”¹

This does not matter whether the message comes from WHO director Ghebreyesus about COVID, or signage posted by facility managers encouraging occupants to “turn off the lights.”

However, a recent COVID messaging study conducted by Jordan and two other researchers suggests that messaging that focuses on the public good can have as good, if not greater, impact on changing behaviors. This is where facility managers and water reduction strategies come into the picture. Their study, “Don’t Get It or Don’t Spread It,” concludes, “We never found self-interested framing to be more effective than prosocial framing (messaging for the public good). Our findings align with evidence that people are moral actors who care for others, are motivated to avoid appearing selfish, and that regard for others is especially strong.”

With this in mind, is there a way to get the message to a large number of people—for instance, all those in a commercial facility—that they are doing good for everyone by reducing water consumption?

One method that proved effective and changed water behaviors in an entire town occurred in Belen, Costa Rica. With just over 20,000 people, Belen had few concerns about water for decades. But climate change and antiquated water infrastructure resulted in large amounts of water lost to leakage. To raise community awareness around water use and steps to reduce consumption, the government began a general messaging campaign. They took the following steps:

After eight months, it was found that the entire town, including the control group, had reduced water consumption, primarily because of the general messaging campaign. However, those consumers receiving the red sticker bills reduced consumption the most, about 2. Although a relatively small reduction, it was still significant, especially because it was accomplished in just eight months.

So, how can we apply something similar in a commercial building? Is it possible facility management teams could post messages congratulating users of one facility for using less water than a comparable facility next door? How about using the red sticker routine, gently informing tenants of one facility that they are using more water than their neighbor?

Many facility managers are taking what we call “mechanical” steps to reduce water consumption—installing technologies that use water more efficiently as well as no-water restroom fixtures. As significant as this can be, we need to change behaviors, so the people using facilities do their part to make water reduction a long-term change.

² “How state and local governments can use nudge thinking to improve outcomes,” Deloitte Insights, May 16, 2017. 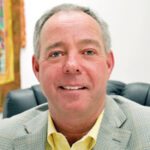 Reichardt is CEO and founder of Waterless Co., Inc., in Vista, CA. He founded the company in 1991 with the goal of establishing a new market segment in the plumbing fixture industry with water efficiency in mind. 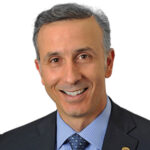 Emilio Tenuta is senior vice president and Chief Sustainability Officer at Ecolab, a global leader in water, hygiene and infection prevention. He is involved in advancing global sustainability practices, with a focus on water stewardship and climate action. EcoLab recently launched an enhanced version of its Smart Water Navigator, a free online tool to help businesses and facilities managers better manage water in their operations and take action toward water goals.

What is the top water management challenge you see clients encountering on the facilities level?

Most companies set water targets with a one-size fits all approach, meaning that they set uniform targets across all sites. This leaves many facilities trying to adopt the same approach as sites in a different water situation or context—but it’s not an apples-to-apples approach.

Overall, corporate water efforts to date tend to focus on improving operational water use efficiency within facilities. That often means there is limited consideration for the relationship with surrounding water basins—or the areas from which local facilities are pulling water resources. As a result, many targets are not fully aligned with needs of the surrounding water basin and fail to address the root causes of water challenges. This is particularly true at the facility level, where managers often lack the tools to measure and set local water targets that can deliver meaningful improvement. (Our recent survey conducted with sustainability research organization GreenBiz about the state of corporate water management showed only 50% of respondents using tools to track or measure progress.)

Tools that help assess local water risk and set and identify context-based water goals are an important part of an overall water management strategy. Companies like Digital Realty have deployed tools, like the Ecolab Smart Water Navigator, a tool built in partnership with Trucost, WRI, and other Ecolab partners, to identify facilities that were under the greatest operational water-related risk and prioritize actions for those specific facilities. These tailored steps can be actioned by local teams to improve water use and efficiency, in turn creating a more effective strategy.

Facilities teams are interested in leak detection tools, for both conservation and detecting leaks. What is your insight on actions or tools to consider?

Water measurement and real-time data monitoring of critical unit operations in facilities has been a longstanding challenge in driving conservation and leak detection. As facilities adopt more digital solutions, performance across commercial and manufacturing facilities is on the rise. [With technology tools,] managers receive actionable insights on water performance, water use, critical operations and assets at the enterprise, site and asset levels to identify opportunities to conserve water and save energy.

Share your thoughts about these articles in the Comments section below, or e-mail the Editor at [email protected].