DT Research, a designer and manufacturer of purpose-built computing solutions for vertical markets, announced the LT300 line of fully rugged, 360 convertible laptops designed for versatility, durability, and reliability in harsh conditions. Each laptop has an antimicrobial enclosure to inhibit the growth of microorganisms on the surface of the unit. The LT320, LT330, and LT350 laptops have a 360° rotating display purpose-built for military, first responder, law enforcement, field service, and warehouse environments with IP65, MIL-STD-810G/H, and MIL-STD-461F ratings; EPEAT certification; and TAA compliance. 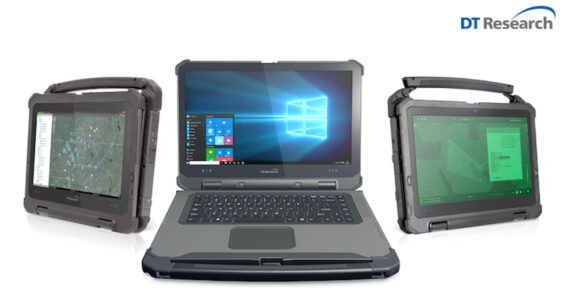 “We have heard from customers who need a fully rugged laptop that can easily convert into a tablet with enough battery life for mission-critical situations,” said Daw Tsai, president of DT Research. “Our convertible laptops are military standard rugged with a uniquely designed display that rotates 360° to smoothly transform into a tablet rather than having to detach and reattach the keyboard, which can be very cumbersome in confined environments. We also overcame the insufficient battery life that is prevalent with other convertible laptops by including standard dual high capacity batteries that are hot-swappable for continuous operation.”

The LT300 series transforms from a laptop with an 88 standard, full-size keyboard with multi-touch pad into a tablet by flipping the screen 360° and closing it to the back of the keyboard. This design makes the transition from laptop to tablet possible within confined or crowded spaces, such as a plane tail section or in an engine room.

The LT300 convertible laptops have antimicrobial enclosures to control infection while also delivering a military standard IP65-rating for water and dust resistance; MIL-STD-810G/H for shock and vibration protection; MIL-STD-461F for EMI and EMC tolerance; and are HERO (Hazard of Electromagnetic Radiation to Ordinance) tested. Temperature operation: 14°F to 140°F, optional -22°F to 140°F; storage: -67°F to 158°F and humidity 0% – 90% non-condensing.