StepNpull’s patented, ADA-compliant foot-operated device mounts on any commercial latch-less wood or metal door, giving users the option of pulling the door open with their foot instead of the door handle. The StepNpull device was created as a way to minimize the spread of germs through constant touching of door handles in high-traffic locations. 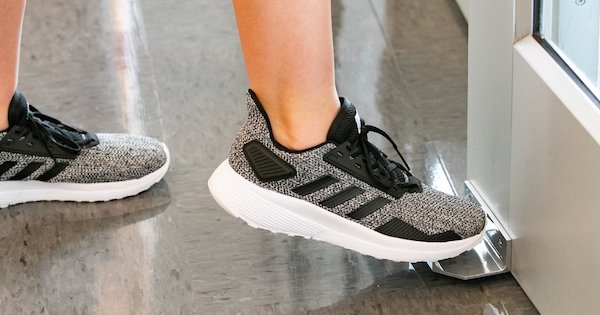 StepNpull was founded in 2007 by Mike Sewell, Ron Ely and Kelly Coddington, who previously worked together in the telecommunications industry. Sewell entered the “Shark Tank” on behalf of his two business partners, seeking $300,000 for a 3% stake in the company.

The episode opened with Sewell’s pitch, a gross, eye-opening, and humorous depiction of someone not washing their hands after using the urinal in the men’s restroom. Sewell demonstrated how the StepNpull device allows people to open doors with their feet to avoid touching public door handles with their hands.

“Every entrepreneur’s dream is watching the Sharks start a bidding war,” said a “Shark Tank” social media post featuring StepNpull negotiations from the episode. Potential investors Lori Greiner, Daymond John, and Kevin O’Leary were all quick to “bite” on the StepNpull idea. Each Shark kept lowering their equity in a race for a deal.

Mark Cuban and Robert Herjavec were the first two Sharks to drop out of the negotiations, but not after complimenting Sewell and the StepNpull team for living the “American and inventor’s dream.”

O’Leary started off the bidding by offering $300,000 for a 10% stake in the company. John quickly countered O’Leary’s offer promising a reduction in manufacturing costs and $300,000 for 12% of the company.

Greiner made the next offer of $300,000 for a 5% stake, plus a royalty of $0.50 until $500,000 was paid. The royalty would then drop to $0.20 in perpetuity. Her vision included getting StepNpull into all big-box retailers and an infomercial strategy to sell them as a “consumer product.” Other Sharks and Sewell were not sold on the strategy, as the large majority of sales are business-to-business.

John followed up with a second offer, reducing his equity from 12% to 8%. StepNpull’s Sewell countered John to drop his equity to 6% which was quickly refused. After the counter-offer to John, Greiner dropped out of the negotiations.

In an effort to maintain equity, Sewell countered once again for John to revise his offer to 7%, which was interrupted by O’Leary, who quickly suggested he would be interested in 7% for a $300,000 investment in the company. After the offer, John still refused to budge, citing the value he knew he would bring to the table for the company.

To put more pressure on John, O’Leary once again lowered his equity in the offer, this time to 6% for a $300,000 investment in StepNpull. Cuban chimed in and kept telling Sewell to “stick to his guns” and maybe even “walk away” from a deal to continue to run the business successfully as his business has for the last 13 years.

After careful thought, Sewell accepted the $300,000 for 6% equity in the company from O’Leary.

“We are beyond excited to partner with Kevin O’Leary and his team, we have believed in our vision for over 13 years and we think the decision to work with Mr. Wonderful will help us take StepNpull to the next level,” said Sewell.