Graham Construction has 13 offices across Canada and the U.S. and is one of the largest construction operations in Canada. Its vision is to be the premier integrated construction solutions partner in North America and throughout its history has been known for its innovative practices. Teaming up with Accara IT Services, a technology integrator based in Kingston, Ontario, and Axis on a previous project resulted in a security and safety solution that Graham wanted to replicate at a build of a food processing plant on a 15-acre site in London, Ontario. Accara and Graham took the security concept that had worked exceptionally well on that project, improved upon it, and installed it at this site. In addition to providing security, safety, and mass notification, the solution provides Graham with the hard evidence it needs to support investigations in the event of a breach — a fact that makes Graham more desirable to work with.

“From a competitive point of view, when you’re going after very highly sought-after trades for a project, I think a top-of-the-line construction site with a heightened level of security is an incentive for them,” says Mike Candow, project manager at Graham. “As far as I know, there are very few folks out there even coming close to what we’re doing with Accara and Axis on construction projects and I think that’s a huge draw.”

The total solution is contained on 12 posts — each 6 inches by 6 inches wide by 16 feet high — cemented in-ground in strategic locations throughout the work site. Each post contains an outdoor-rated, shielded, red emergency button wired to a network relay, which activates mass notification/evacuation; a junction box where all of the electrical connections are made; one Axis network camera with pan/tilt/zoom (PTZ) functionality; one Axis network camera with 360-degree coverage; and two Axis network horn speakers mounted so they face in opposite directions for optimum audibility. The video management software (VMS) that connects all of the equipment and allows control of the entire system is the AXIS Camera Station.

“It’s very modular,” describes Candow of the solution. “We’ve actually designed it, because construction sites are always changing, so when we dug the posts in, we made sure that we could pick the whole post up. The complete system can be moved anywhere throughout the site at any given time, all depending where the construction is ongoing,” he says. 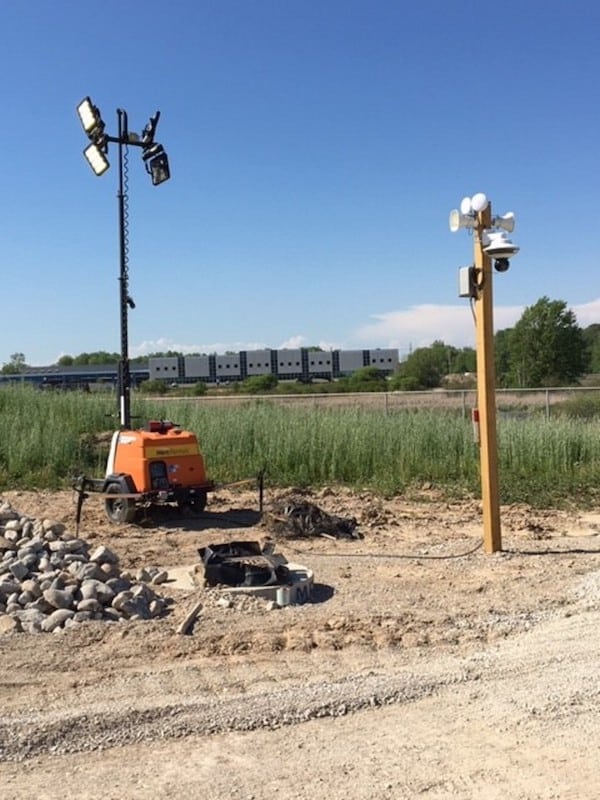 The equipment is powered via movable LED light towers situated near each post. By way of diesel engines, the towers provide light to the job site during low-light conditions or for added safety, and act as generators to provide power for the security equipment.

In order to ensure connectivity of the Axis network cameras and Axis network horn speakers to the VMS, Accara installed a wireless network. “We have a Wi-Fi bridge running from every pole back to the main site, so we can bring the video or IP signal back to the main trailer,” says Brian Fleming, president of Accara.

Given the scale of the project and the fact that more than 700 workers can be on-site at any given time, one of the primary functions of the safety solution is the ability to signal an emergency and potentially evacuate the site. “If something on-site happens — you have a gas leak or you have a major incident, a first-aid scenario — any of the workers on-site can hit this button, which basically engages all of our cameras, all of the horns, and evacuates the entire site. We’re able to evacuate everybody quickly and safely in the most efficient manner possible,” Candow explains.

Audibility can be a problem on a job site, given the acoustical properties of construction materials and activities such as welding and sawing. On previous projects Graham had used air horns for mass notification, but the volume was not adequate. So Candow and Fleming brainstormed, and the result was installing Axis network horn speakers, which are outdoor loudspeakers that provide clear, long-range speech. The workers can now hear announcements easily, even while wearing their personal protective equipment.

All 24 of the system’s horn speakers are synchronized to broadcast simultaneously. “We can have recorded messages, or in this particular case, we just have recordings of air-raid sirens. Once the trigger goes, then the AXIS Camera Station pushes that audio clip to the horns,” Fleming notes, adding that the mass notification system also has the potential to operate as a general public address system for announcements.

The other primary function of the Axis system is security and surveillance. It is comprised of 24 network cameras transmitting to the AXIS Camera Station VMS.

“Everything is set up for recording on video triggers, so if there is activity in a particular zone, then it’s going to be recording that area,” Fleming explains. “[Cameras] also will be tracking motion when it’s in their visibility.”

“For the work that we do, the most beneficial part is being able to review actual footage from across a site. It also gives folks a chance to be in the building, at their office, and still see what’s occurring on-site at all times. This is a 640,000-square-foot facility. If you wanted to leave your office and go for a walk, it takes about an hour to get all the way around the site, so to have the ability to just check on something from your office without having to do that walk is highly beneficial to folks,” Candow says.

Candow believes the system will provide the same benefit it did at another work site, also in Ontario.

“We had two generators stolen off the site before we got the cameras installed, unfortunately. I had the Ontario Provincial Police come out and they said, ‘We can open a file for you, but we can’t open an investigation unless you have either an individual by name or video proof’ so you can identify the face,” Candow recalls.

With these cameras installed between 12 and 15 feet high, “that’s a perfect height to be able to zoom-in for facial recognition. Then we can send that to the police department and open a proper investigation. Without it, you couldn’t do much,” he says.

Theft can be a major problem on construction sites because there is a lot of valuable, but portable, equipment. “All of our subcontractors feel far more secure leaving their equipment on-site if they know that we have this system in place,” Candow says. “I know that all the trades think it’s just fantastic. We’ve actually captured some individuals stealing equipment from a previous project; the equipment magically showed up after we sent the video to them. That comfort level of not losing very expensive equipment is something I think people really appreciate,” he relates.

Additionally, recorded video is essential for substantiating any safety-related occurrences. “If there’s ever an incident on-site, we do a thorough investigation. As project management teams, we are bound by the court of law for anything that occurs on a job site. Having video proof of exactly what happened is a safety net for project management staff,” he says.

In every part of the site where construction occurs there is one or more camera pairs, “so if you drove around the site, I could watch you from the main gate, all the way out to the back side of the job site — all the way out to the far northeast gate, just following you along all the cameras. We definitely have the coverage that we require,” he says.

Candow believes the solution is a testament to the flexibility and scalability of the Axis product line. When this project is done, he plans to uninstall the security poles and re-install them at the next construction site. “Axis as a whole have been very supportive,” Candow says. “The speed and efficiency at which we can have these cameras installed, working with Brian and his team, is quite impressive. We had everything up and running within a week. Overall, from upper management to the workers on site, everybody is more than pleased with the efficiency and the quality of the product and what it brings to the table.”