Much has changed in the nearly four decades since the America Burning report was issued in 1973 and revisited in 1980. The number of fires and fire deaths in the United States has reduced dramatically, which unfortunately has led to fire safety taking a back seat to other concerns that seem more pressing. To understand the headway that has been made and the challenges that remain, the National Fire Protection Association (NFPA) commissioned its affiliate, Fire Protection Research Foundation, to examine the current state of fire safety in the U.S. The new seminal report, Fire in the United States Since 1980, Through the Lens of the NFPA Fire & Life Safety Ecosystem offers valuable insights to advance fire and life safety. 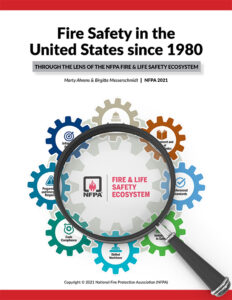 The report references success in several occupancies such as hospitals, nursing homes, schools, and hotels. However, the main focus that emerged from the study is residential fires: Homes have consistently accounted for the largest share of reported structure fires and most of the civilian fire deaths and injuries. And although there have been fewer fires in the U.S. than in past decades, statistically, if a home fire is reported, occupants are more likely to die today than 40 years ago.

In fact, research shows that:

The 63-page report shows, in part, that:

The new study analyzed fire data and other research from the past 40 years to provide a snapshot of what has influenced safety. Additionally, catastrophic multiple-death fires and fires in the wildland/urban interface (WUI) were looked at because they have the potential to cause significant human loss.

“Increasing the understanding of what has impacted fire safety can help identify what needs to be done to further reduce death and destruction,” said NFPA President and CEO Jim Pauley. “Year after year, we see nearly 3,000 home fire deaths in the U.S., one of the most advanced countries in the world, and the problem is markedly worse in countries that don’t have a fully developed fire and life safety ecosystem yet. As a global authority committed to eliminating loss due to fire, electrical, and other hazards, NFPA will continue to advocate for the protection of people and property as we have for 125 years. But we cannot do the work alone. We need all of the elements of the Ecosystem working to connect the dots on safety.”

As the report name suggests, the new benchmark research was conducted with the NFPA Fire & Life Safety Ecosystem in mind. NFPA introduced the Ecosystem in 2018 so that professionals, practitioners, and the public had a framework that identified the key elements that play a critical role in fire, life, and electrical safety. The eight components are government responsibility, development and use of current codes, referenced standards, investment in safety, a skilled workforce, code compliance, preparedness and emergency response, and an informed public. When all the Ecosystem elements work together, the result is a fully functioning system that can benefit everyone. If one or more of the components fails, the system breaks down and tragedies can occur.

Workplace Culture January 24, 2022
Employees no longer think there will be a “return to normal” when it comes to work, and wish employers would make plans accordingly.