Transitioning all new fluorescent bulbs to LEDs in the United States would cut annual carbon dioxide emissions in 2030 by an amount equal to the emissions from 4 million typical passenger cars over a year, a new report finds.

Once regarded as an energy-efficient option, fluorescent tube light bulbs use far more energy than today’s LEDs and are now a needless toxic health risk, according to the study published by the American Council for an Energy-Efficient Economy (ACEEE), the Appliance Standards Awareness Project (ASAP), CLASP, and the Clean Lighting Coalition. Laws and rules restricting the use of toxic mercury have generally exempted these mercury-containing bulbs because of a lack of better options, but for the first time, the report shows that LEDs are now available in all needed shapes and sizes—and cost less to own and operate.

State, federal, and international policymakers should now phase out the fluorescent bulbs to prevent more mercury from being introduced into households and the environment while cutting greenhouse gas emissions, the study argues. As soon as this month, international negotiators meeting to update a convention on mercury pollution may do so. 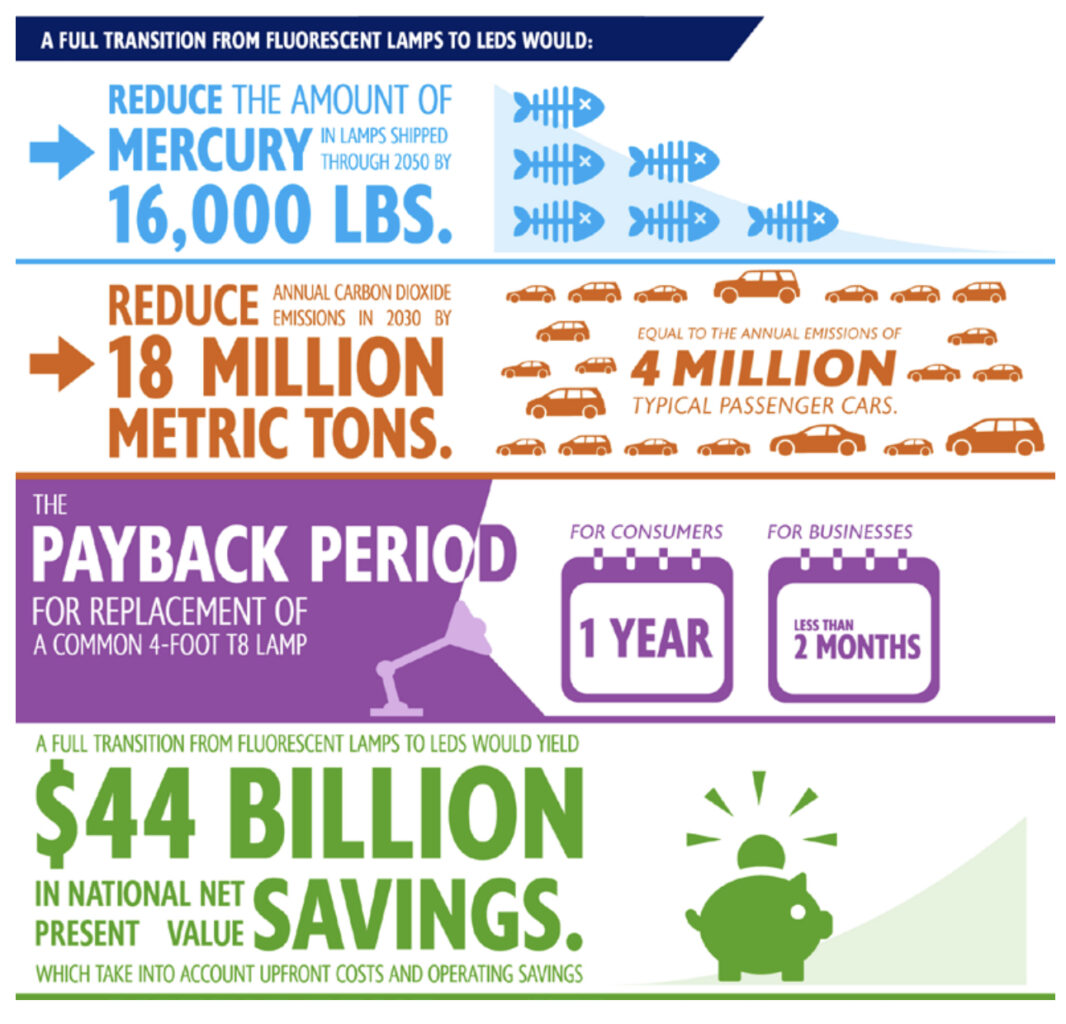 The bulbs at issue are the four- and eight-foot tubes common in commercial buildings and in some home kitchens, basements, and garages, as well as several types of compact fluorescent bulbs designed for use in certain fixtures. Their toxic mercury can be released in several ways. An estimated 75% of fluorescent bulbs used in the U.S. are not recycled or disposed of properly; mercury leached from landfills eventually reaches rivers, lakes, and oceans, where it bioaccumulates in fish and shellfish. Consumption of contaminated seafood is the leading cause of human exposure to mercury. Broken bulbs in homes and buildings, if not properly cleaned up, can also present a health risk to those nearby.

Rapidly phasing out most fluorescent models would prevent bulbs containing 16,000 pounds of mercury from being sold and installed in the U.S. through 2050, the study finds—a massive amount for a toxin that can damage the human brain with only a miniscule quantity.

“Fluorescent bulbs used to be the energy-efficient option, but that’s just not the case anymore. LEDs have changed the game and we found there’s no good reason to keep using fluorescents at this point,” said Jennifer Thorne Amann, senior fellow at ACEEE and report coauthor.

Joanna Mauer, technical advocacy manager for ASAP and fellow coauthor, said, “LEDs are now widely available as drop-in replacements for fluorescent bulbs. In addition to not containing mercury, LEDs last about two times longer than fluorescents and cut energy use in half. Any increase in initial price more than pays off through the reduced electricity costs.”

An international agreement among 137 countries, the Minamata Convention on Mercury, is phasing out the use of mercury in numerous products and industrial processes and uses. But the convention—drafted in 2013—specifically exempts lighting, citing a lack of cost-effective alternatives at that time. Later this month, the nations will consider a proposal that would ban the manufacture, import, and export of fluorescent bulbs in the participating countries.

“The United States can be a leader in the global transition to clean lighting,” said Ana Maria Carreño, director at CLASP, which funded the report. “By supporting the African Lighting Amendment at the Minamata Convention on Mercury, U.S. policymakers will be making a statement to the world that it is time to say farewell to fluorescents.” 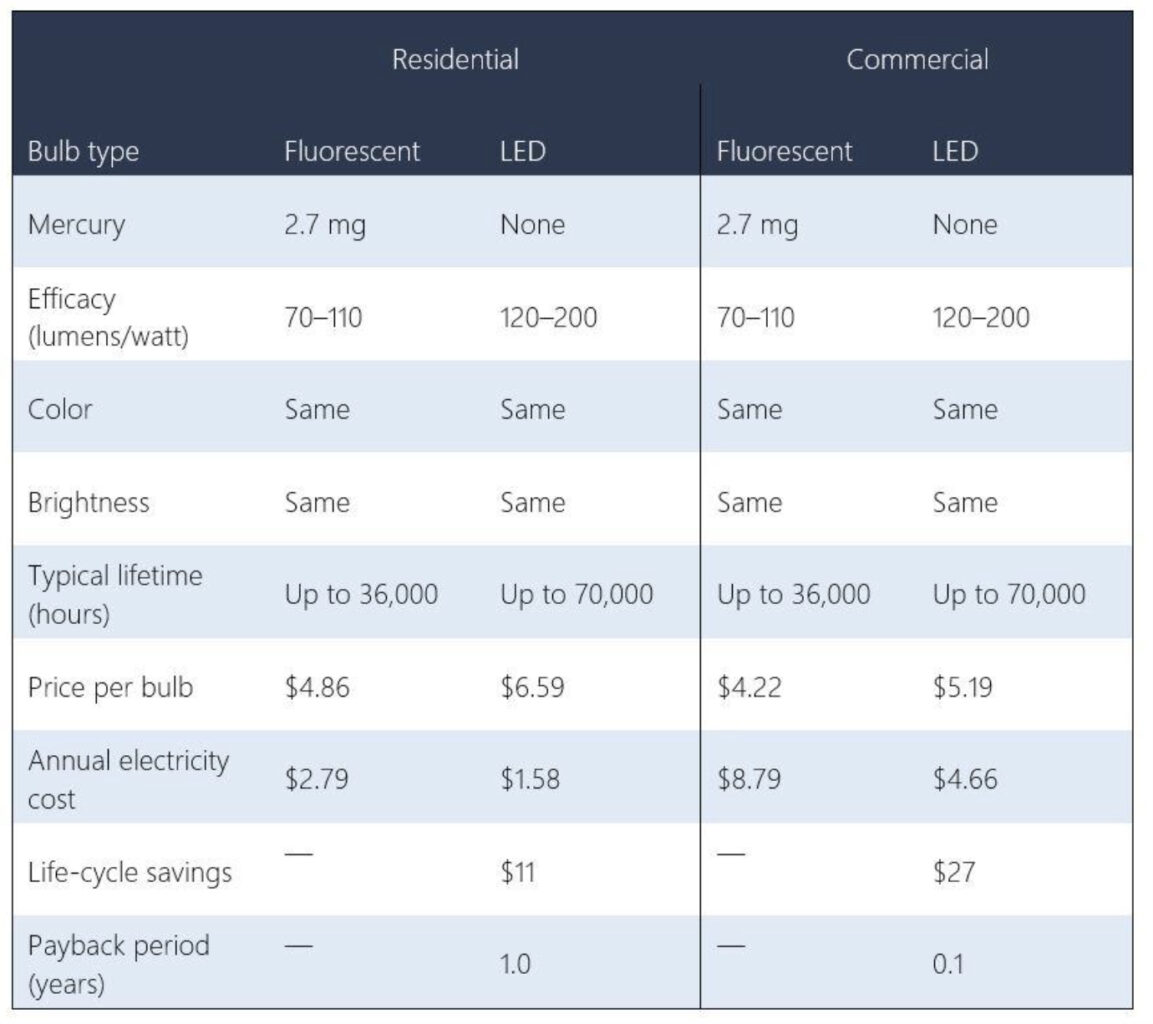 The U.S. can support a global phaseout of fluorescents by 2025 through the Minamata Convention, and the federal government and states can phase out fluorescents through several mechanisms: