The new Academy Museum of Motion Pictures in Los Angeles was created to celebrate the art and science of movies—past, present, and future. With the 2022 Academy Awards, popularly known as the Oscars, to be presented on Sunday, March 27, here’s a feature about this recent design project, leveraging precast concrete, which won a 2021 PCI Design Award. 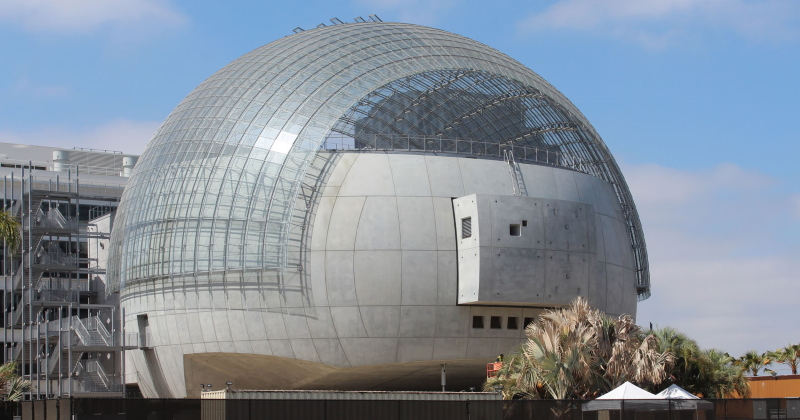 The project involved the exterior restoration and interior gut renovation of a 230,000-ft² historic landmark structure, with the addition of a 60,000-ft² spherical glass and concrete structure to house the 1000-seat David Geffen theater. The 150-ft diameter precast concrete sphere appears to float above ground, offering a whimsical counterbalance to the more sedate renovated historic structure.

The sphere was originally conceived as a cast-in-place concrete shell, but as the design evolved, it became clear that cast-in-place was not the right solution. Precast concrete allowed for better and more cost-effective finish quality and tighter tolerances and geometry control to ensure a perfect sphere.

Because the sphere features a consistent radius, the project required only 30 base molds, which could be reused many times with only minor adjustments of edge forms and blockouts. The use of precast concrete also allowed the large, column-free space, providing unobstructed sightlines for the theater in the round, as well as providing the physical mass necessary for acoustic isolation of the high-performance theater.

Initially, designers were concerned that precast concrete would not be able to deliver the desired variation in the finish. However, the precast concrete producer generated multiple samples and mock-ups to define the best technique to achieve the intended finish appearance. The final design used a standard gray cement and a single aggregate to produce all of the panels.

Rather than using a typical sandblasted finish, which erases all the flaws but also the character, they opted for an “as-cast” finish to impart a luminous surface quality. The resulting sheen on the soffit panels above the plaza brings daylight and reflections underneath the mass of the sphere, helping create a welcoming public plaza.

One of the features of the project was the use of precast concrete panels as permanent formwork to support the structural concrete during placement operations. That meant the precast concrete architectural spandrels had to be installed on a steel structure before the dome could be built. Extensive supports and birdcage scaffolding held the structure in place until the final piece of glass was installed, locking it together like the keystone of an arch. The designer’s signature spider stairways, which feature detailed railings and treads, wrap around the outside of the sphere.

The outer envelope is sculpted to reflect light downward, while a highly articulated and transparent dome glazing system partially wraps the upper half of the sphere, casting a changing pattern of shadows that animate the concrete façade. A terrace and exhibition space is perched on top of the sphere offering panoramic views from under a glass dome. 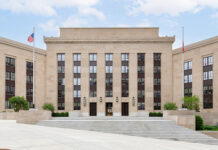 Inside A Historic Office Building’s Restoration 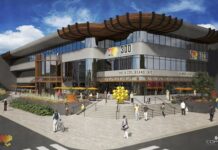 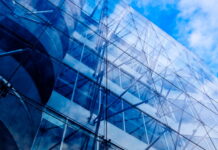