With the emergence of new drone technology over the years, conducting inspections on various types of infrastructure has become much more commonplace. Most people are less surprised now when they see a drone flying around or over a building or at complex industrial sites.

One of the biggest concerns when conducting any infrastructure inspection is the safety of the worker conducting the inspection, whether it be from working at heights, in confined spaces, or around unsafe infrastructure. With the use of a drone, an operator can be safely on the ground while conducting an inspection that might traditionally have a high degree of risk associated with it or that might not have been possible before, such as an inspection on a high-sloped roof (Photo 1) or a metal roof (Photo 2). Once a technician has completed the initial inspection with a drone and identified areas of concern that might require a closer inspection, a plan of action can be created for how to safely complete the work needed to fix any issues identified during the drone flight.

Using a drone for inspections has made it easier for many different types of infrastructure to be inspected than in the past. With high-sloped roofs or metal roofs for example, traditional inspections usually involve a technician using binoculars from the ground to look at the roof, getting up on a ladder and using binoculars, or trying to get a good vantage point from the interior of the building being inspected, if possible.

With the use of a drone, a technician can get a much closer, direct line-of-sight view of the surface being inspected and take a high-resolution photo to create a permanent record of any issues found (Photo 3). Another example of when a drone has become very useful is conducting inspections during an exterior leak investigation. Typically, a technician would attempt a visual inspection from the ground where possible or, if the problem areas can be seen at angles from windows on the same building, then they would try to take pictures from the inside. With the use of a drone, a technician can conduct an exterior leak investigation from the outside and use the drone to get right up to where a leak is identified and capture direct pictures of the suspected area (Photo 4).

Conducting inspections using traditional methods usually requires a technician to be onsite for an extended period, limiting how many inspections can be completed within a given timeframe. One example: A traditional thermographic roof scan where a technician walks the entire surface area of a roof with a handheld thermal camera. Usually, these types of inspections will take several hours to complete and sometimes must be done over multiple days, as the roof material can cool down too much so that it won’t accurately show any thermal deficiencies when there is a large area to cover (Photos 5a, 5b, 5c). An inspection done with a drone can — depending on the size of the site — be done in a matter of minutes, as the drone is able to get to an altitude where the entire inspection area can be covered in one shot. This is beneficial for sites where timing is critical, including when the roof is made of material which loses its thermal capacity quickly once the thermal load from the sun is gone. As a thermographic roof inspection with a drone can be completed quickly, sometimes a technician can also complete multiple inspections in one night at different locations. Conducting a thermal scan on a million-square-foot warehouse can usually be completed in about an hour when flying it with a drone, whereas technicians walking the entire surface area with handheld thermal cameras would take multiple nights to complete the scan.

Another substantial benefit to using drones for inspections is not only about being able to save time and inspect areas that are not usually inspected, but also the cost-efficiency over some traditional inspection methods. Typically, there is equipment required for an inspection that have high costs associated to be able get to where an inspection needs to occur. An example of this is inspections done on high-rise façades. Often if an inspection is needed on a high-rise façade, a technician will require the use of a swing stage or rope systems to scale the wall of the building. These pieces of equipment are used so that the technician can see issues directly in front of them. With the use of a drone, these rental costs are not necessary until repairs might be required, as a technician can use the drone to fly up and look at the façade and see issues through the drone’s camera (Photo 6). 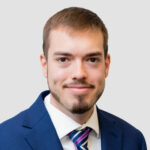 Carroll is a certified UAV/drone pilot, UAV flight reviewer, professional GIS analyst, engineering technologist, and photographer. In addition to leadership responsibilities as a UAV Practice Leader for IRC Building Sciences Group, a Rimkus company, he uses drone technology to conduct inspections of building elements. Carroll transforms data collected through drone inspections into actionable information through application of GIS and digital mapping technology. He has extensive work experience providing services to various industry sectors including infrastructure, government organizations, aggregates and mining, environmental, utilities, transportation, and many others. Carroll holds a B.A. in physical geography with a minor in geomatics from Carleton University. 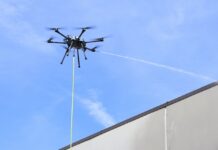 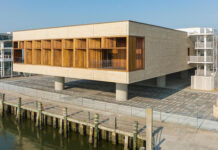 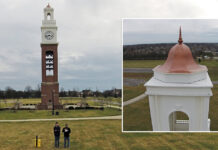